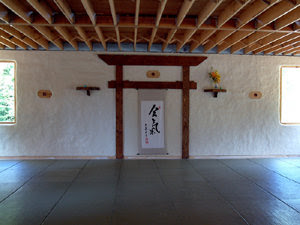 Last week’s colds got in the way of another trip to observe Aikido classes. We finally made it today. Noah, Sophie and Fiona came along. One of the kids got Noah and Sophie involved in a game of tag before class started. Good start. There were only five kids in the class and the sensei came over and asked Noah and Sophie to help out, especially with the games, since they were missing a few bodies. They agreed.

They stayed in for the whole class, introduced themselves, counted aloud to five in Japanese during the warmup, participated all the way through and gave everything they had in the games and relays.

Fiona had a few sobs in the middle because I told her she was too young to be in the class. I promised to ask if there were classes for littler kids and she settled. I didn’t have much hope but it turns out there is a young kids’ class on Sundays, right before the regular kids’ class. It has just three students, but it’s going. I guess we’ll take her in time to watch this week.

I brought home registration forms. Looks like we’re in. The kids really enjoyed themselves. I’m so glad I pushed past the hump.