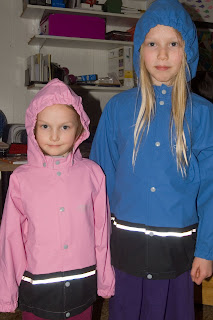 Last fall, before our canoe trip, I did my best to scrounge around and find everyone a rain jacket. I came up short. It was early September and we were heading into the cold wet months in our area, but there was nothing on the racks in the stores. They had windbreakers/warmup jackets and polyester fleece and cotton fleece. And in the high-end stores for $250 you could find parka shells made of waterproof-breathable fabrics, with taped seams, designed mostly for layering over fleece for waterproofness in the snow … though there was nothing in kids’ sizes in our neck of the woods. I didn’t have time to mail-order; I’d just assumed that rain jackets were everywhere during the back-to-school season.

It was much to Sophie’s detriment that we failed to find appropriate rain gear in the stores before our trip. I had given Erin an old waterproof jacket of mine, and Fiona was fine in a slightly-too-small yellow rainslicker that I had sewn up several years earlier for an older sister. Noah had a lovely Wetskins jacket that I’d managed to scoop up at a thrift store the previous spring. But when we got caught in a day of cool fall rain out on the lake, poor Sophie suffered. Upon our return I was determined to find her a good-quality waterproof jacket no matter the cost.

When I was young every kid had a rain jacket. You would have a winter jacket and snow pants, and winter boots for the coldest months, and the remainder of your core outdoors-wear wardrobe would consist of a rain coat, rain boots and maybe an umbrella too. Plus sweaters for warmth underneath. So why could I not find a single waterproof jacket for Sophie in any store in the area? (I must admit that we have very few shopping options. There are three thrift stores, a WalMart, a high-end outdoors store and a baby boutique that carries a few items for children as well. But still … why was no one selling raincoats in September? I had expected to find two or three racks of choices, at least, at the WalMart, but there was nothing.)

I have a feeling it’s because children aren’t expected to spend time outside in the rain any more. Most don’t walk to school on nice-weather days any more, but even those that do certainly wouldn’t be expected to do so if it’s pouring rain. Outside play is much less common in these days of wii’s and million-channel TV, but would certainly not be expected if the weather is at all inclement. Children just do not spend the kind of time outdoors that they once did.

At any rate, I finally found a source for lovely Oko-tex standard imported Swedish rainwear right under my nose; some Scandinavian homeschooling acquaintances in Nelson were importing them, having been unable to find anything comparable in North America. I bought Sophie one right away. Last week they e-mailed to let me know that they were liquidating their remaining stock to make room in their lives for other things so I took the opportunity to grab Fiona one of their lovely jackets too at half price.

I now know how rare and precious a good child’s rain jacket is. We’re thrilled to have these two jackets in the family now, and will cherish them.

Where have all the raincoats gone?

16 thoughts on “Where have all the raincoats gone?”