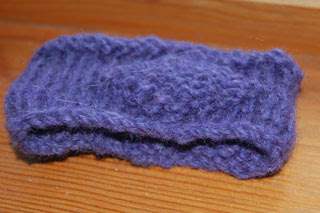 I first taught Sophie to knit around her 7th birthday. Shortly after her 9th birthday I finally taught her to purl. She also learned to cast on and off around that time. She made a bunch of lovely korknisse. And then just before Christmas she wanted to knit mittens, so I introduced her to four double-pointed needles and knitting in the round. She struggled mightily with the mittens. One is close to done now, but it was a long haul just getting through the cuff, and as the almost-finished mitten sat on the coffee table for more than a week, untouched, I wasn’t sure if that had done her in for knitting for good.

But look at what she did this morning with some purple yarn! She cast on a few dozen stitches in the round on double-pointed needles and knit a little sampler, with a purled diamond in relief. How did she figure out how to do that? How to build the pattern, how to keep track of which stitches were which? Now, admittedly, I’m knitting something with similar pattern, and she’s been curious about it, watching over my shoulder a bit. 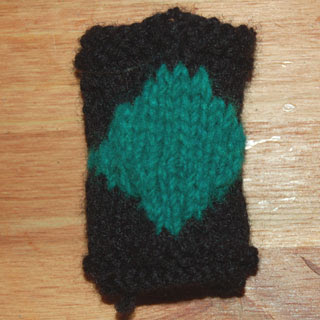 But then she showed up with this. It’s similar in that it’s a diamond pattern, but here she’s done an ‘intarsia’ style alternate colour thing for the motif. She has never seen this done. The last time I did intarsia or fair-isle knitting she was still in utero. She just knits up these little things while watching Noah script computer game mods, or while humming away, chatting to Fiona.

This is typical of Sophie. She is not worried about not knowing how to do something. Just as she will wing it and improvise in the kitchen with baking recipes, she enjoys trying to figure out how to execute different patterns and techniques with needles and yarn.