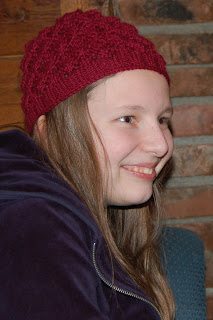 And she likes the hat I knit for her!

A low-key celebratory day, as she prefers. A nice supper with grandma over, a decadent chocolate torte baked by Sophie. The afternoon had us at the local nursing home playing music for the residents and staff, and all the Suzuki kids sang a quick “Happy Birthday” to her in the room where we were tuning up. The evening brought three simple gifts, popcorn and a video.

When we were in Calgary she had her first violin lesson in 7 weeks. That’s far too long an interval, but all the holiday performances got in the way of a December lesson trip. At her previous lesson she’d given four possibilities (Vitali, Bruch, Bloch or Lalo) from which to choose her next repertoire challenge. She went home and listened to recordings a few times. After a lot of waffling she settled on the Bloch Nigun, but it is by far the most technically challenging piece she’s taken on, and without even a minimum of preparatory guidance she was in a bit over her head. She managed to learn the notes, but in an ideal world would have had a lesson before delving in, and then another one within a couple of weeks. But she soldiered on as best she could … and her lesson 7 weeks later was very much needed and very helpful, I think. They spent almost 90 minutes on that piece alone. Despite working full-on through a 2-hour lesson, they didn’t even touch on two of the other major pieces she’s working on (unaccompanied Bach and a Hadyn concerto with a cadenza that’s never had a teacher’s ears put to it). We’ve decided to go back in under a month, in an attempt to make up for the long gap and give her a little more of what she needs.

And then yesterday her weekly piano lessons started again after a two-month gap. (Her piano teacher travels a fair bit.) She came home with a whole lot of new music — Liszt, Katchaturian, Scarlatti, and a bunch of other stuff, as well as orders to sight-read like crazy and polish up her Chopin Nocturne, and to look at the Schubert Four-Hands Fantasie with a view to a performance in early April. There will be a piano recital next month, music festival performances on both instruments in April, and a violin video audition in late March.

So both piano and violin study are in high gear right now. This simultaneity is a first. We’ll see how she copes.

One thought on “Fourteen”