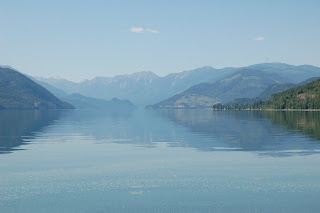 Yesterday Chuck took the kids down to the lake for a quick swim before supper. I stayed home, ostensibly to work on SVI administrative stuff and start dinner, though I didn’t quite get to the latter. It was a scorcher of a day and though our un-air-conditioned house with its log walls and deep roof overhang stays pretty cool, things were getting pretty hot and sticky even chez nous. A swim was a welcome bit of refreshment for them all.

They came back raving about how warm the lake was in the little bay where they swim, in front of the GRUBS garden. “Almost like bathwater” they said. Now, in the context of a glacier-fed lake, “almost like bathwater” just means “cold, but not painfully so.” It means it’s tough to get wet, but after a few minutes it feels not so bad, at least not until you start to turn blue. My kids, born and raised on this lake, don’t mind cold water. At Halcyon Hot Springs they will willingly play in the “cold plunge” pool, which is a mere 50 degrees F. But Chuck concurred — the lake was incredibly warm in the bay. Actually enjoyable for someone raised in Ontario to swim in.

Today was another scorcher and the kids were eager for a post-supper dip, so I volunteered to take them down. I’m not much of one for ice cold water, having also been raised in Ontario. I’d heard the “bathwater” word the day before, and I was looking forward to a nice dip.

Erin, as always, was the first to hit the water. “Argghhh! It’s freezing!!!” she said. At first I thought she was kidding. She’s the one who never minds cold water; she normally says “naw, it’s not cold,” and waltzes right in, even when it is cold. But she wasn’t kidding. Even after she stood there, half in, for a few minutes, her legs kept aching from the cold. The rest of us ventured slowly in. Partly.

I grabbed the thermometer from the GRUBS garden to test the water — a mere 54 degrees Fahrenheit. Yikes!

Slocan Lake is deep, very deep — as deep as 1700 feet at one point. And so it holds incredible amounts of water. The top few feet will warm up in summer (and cool down in winter) but the bottom 95% of the water in the lake stays at pretty much the same temperature year-round.

Even with winter cold snaps of minus twenty for days on end, the lake doesn’t freeze, except maybe just a foot or two around the edges. Except back in ’54 (or was it ’57? they still talk about it…) it was so calm and so cold for so long that there was ice from New Denver to Silverton.

Calm is what’s needed for the air to affect the surface water temperature, and I guess that’s what there wasn’t between last night and tonight. We live up a side canyon, and we certainly didn’t experience any appreciable wind, but clearly something stirred up the water enough to stir the icy depths up to the surface.

We all eventually got in. Only Erin (on purpose) and Fiona (by way of an accident) dunked their heads. No one but Erin stayed in for more than a couple of minutes. Sheesh, did I ever pick the wrong day to be the designated parent at the lake.

Afterwards we ate lots of cherries off the nearby trees for dessert. It’s our civic duty to eat as many cherries as we can off town trees to reduce the bear risk. Consider it community service.

Wrong day in the lake

3 thoughts on “Wrong day in the lake”