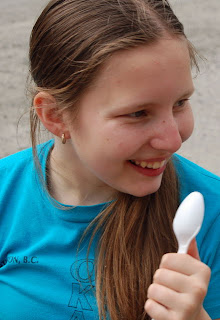 For years I have been saying “we’re not doing adolescence in our family.” I’m sure many people on the message boards and e-mail lists I frequent have quietly snickered and thought “just you wait…” Some have certainly snickered not so quietly. So far I stand by what I have believed all along — adolescence is a social construct that comes of shortening childhood through the pressures of media, consumerism and peer-culture and delaying adulthood through impoverished expectations of teens and twenty-somethings. It’s a period of little true responsibility, peer orientation and severed ties with family that is, anthropologically speaking, an unnatural anomaly. I’ve felt this in my gizzard since I was a teen myself.

Psychologist Robert Epstein has written a book called “The Case Against Adolescence,” which I haven’t yet managed to get my hands on. It’s at the top of my wishlist. Here are excerpts from an interview he did recently in Psychology Today:

“We have completely isolated young people from adults and created a peer culture. We stick them in school and keep them from working in any meaningful way, and if they do something wrong we put them in a pen with other “children.” In most nonindustrialized societies, young people are integrated into adult society as soon as they are capable, and there is no sign of teen turmoil.”

“In this country, teens learn virtually everything they know from other teens, who are in turn highly influenced by certain aggressive industries. This makes no sense. Teens should be learning from the people they are about to become.”

“The adversarial relationship between parents and offspring is terrible; it hurts both parents and young people. It tears some people to shreds; they don’t understand why it is happening and can’t get out of it. They don’t realize they are caught in a machine that’s driving them apart from their offspring—and it’s unnecessary.”

Epstein’s book has just vaulted to the top of my must-read list.

7 thoughts on “Adolescence? No thanks.”