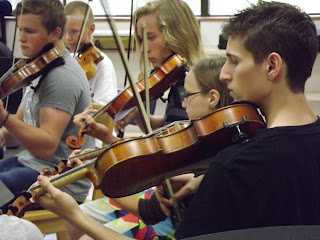 Another SVI has come and gone. This year a lot of the organizing fell to me, since my mom moved away last fall. So I found myself doing my usual Suzuki-parenting, plus a lot of the this-and-that volunteer stuff I’ve usually added to that, plus the lion’s share of the administration. I confess I didn’t sleep a whole lot.

For the first time Fiona got included in the chamber music program. That meant she was in the same program as Sophie and Noah, though they were all in different quartets. Noah and Sophie had worked hard to reschedule their shifts at work to clear time for SVI, and I was a little worried about how they would transition from that grown-up world of employment amongst adults to a music camp with kids — one that included their baby sister. But it was fine. Fiona fits in with teens pretty well, and the older kids were of course pretty lovely with the younger ones. They’re Suzuki kids after all … they’ve grown up in communities of fellow music students where mutual support, regardless of age and level, is the norm. 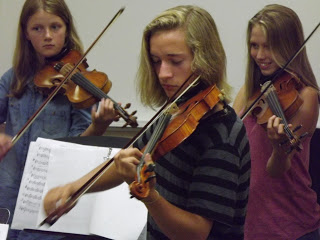 The opening chamber orchestra performance was a string version of Handel’s “Arrival of the Queen of Sheba,” which showcased the experienced violinists and violists and gave the less advanced cellists a manageable role. It was a cheerful and energetic start to the main SVI week.

We had about the same number of students as the past couple of years: just over 80. And as is normal for us, a huge proportion of the students, almost three quarters, are repeat enrolees. It makes the whole thing feel even more like a family reunion than it would otherwise. But every year there are some new families shuffled into the deck, and new friendships that spring up. So much magic, both musically and socially. 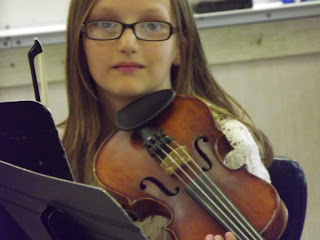 Sophie and Noah have not officially been studying their instruments for the past year or two. They’ve continued to play when called upon, whether with the occasional regional orchestra, or trio gigs around town, but haven’t been practicing regularly or working on solo repertoire. It was a tough call whether to enrol them, but they both said they’d like to be involved and were willing to work to master their music and contribute as much as they could.

And they did. And they pulled out solo repertoire to work on in master class. Sophie dug into the Mozart G Major Violin Concerto, and Noah pulled out the Bloch Suite Hebraique Romanza. They learned their chamber music and orchestra parts well and worked hard. They enjoyed the week a lot. Maybe not enough to continue working on their own throughout the year, but it was valuable for them to see that they could still use their music, and still take up active study where they’d left off and make progress. 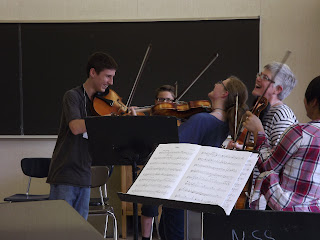 The faculty were mostly people we knew from past years. Favourite people of ours. More of that family reunion feeling. We hung out at the faculty lounge, and Erin joined us after work for Happy Hour. One night we went star-gazing with Erin and Noah’s former teachers from Calgary. Just what we needed: an even later night than usual. But it was totally worth it, and very memorable.

Erin joined in the orchestra at the Faculty Concert, and played concertmaster in the Faculty Orchestra at tutti night. The evening activities were at least available to her. She was working long days at the café, where things were the busiest they’d been all summer by a long shot, thanks to all the business generated by SVI. 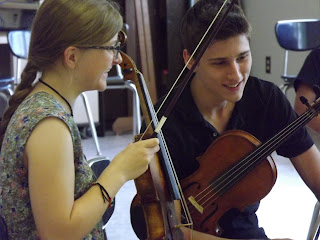 Noah’s quartet did a great job of a couple of movements of the Tchaikowsky Quartet No. 1, and also an arrangement of Billie Jean by Michael Jackson. Sophie was in a quintet playing Mozart K. 516 quintet in B-flat. Fiona took up viola to play the Mozart K. 157 quartet in C Major. The senior orchestra managed the Holst St. Paul’s Suite. And the senior repertoire class of violins and violas did a Michael MacLean Tango.

Together with the new artistic director and the other local co-organizer, I felt pretty good about the whole endeavour. I learned some things about scheduling, and communication, and about the need for delegation. My mom arrived before the last day and seemed pretty pleased to see that the whole thing had proceeded fairly smoothly and that people seemed happy. 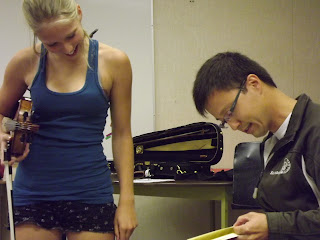 So yeah, there will be a tenth year. We’re thinking ahead already.