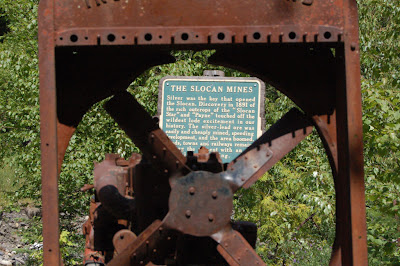 This is a plum area for a teen to find summer employment. With such a small population, and a large summer influx of vacationers, there are plenty of jobs for students. For many teens all it takes is a bit of word-of-mouth expression of interest, and some employer will call them up and offer work.

Noah tends to be a bit of a content homebody, introverted and with few material ambitions, so it took until this summer for him to really want a job. He eventually decided (with a bit of nudging, I confess) that he was interested in The Sandon Job. Sandon is a ghost town near here; it experienced a huge silver mining boom in the 1890s, and is what really opened our whole area up to European exploration and settlement. The town was mostly destroyed by fires and then by a massive flood in the 1950s but a couple of tumbledown buildings have seem some restoration and a few survived the various disasters and been kept up by private interests. There’s a Historical Society that runs a small museum and keeps archives and artifacts. The museum is open during the summer, and typically receives a grant to assist with hiring a student. The job is about 30 hours a week and pays fairly generously. The student is expected to help the adult employees with whatever work is necessary, from cleaning the outhouse (not the pit! just the outhouse!) to greeting visitors and various other types of clerical and cleaning work. 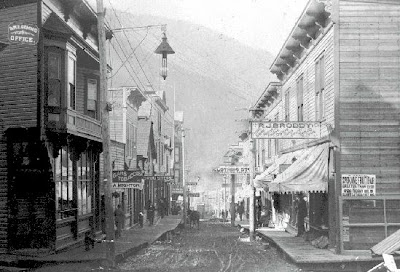 Unlike most of the word-of-mouth service industry hiring around here, this position, being filled by a non-profit society and funded by a grant, has considerably more administrative procedure behind it. They advertised for applicants. Noah submitted a cover letter and a CV. He followed up personally to make it clear that his interest was genuine. He corresponded with the Society president, and then spoke on the phone with the person in charge of hiring. There was then a proper interview (albeit held in the casual circumstances of a local café), and a waiting period while other candidates were interviewed. Finally he got the phone call offering him the job, and there was another meeting to discuss the details. All of which was really terrific for Noah, I think. He has the people skills necessary to present himself well, but he’s always uncomfortable with new situations and unfamiliar expectations. Now he’s done the whole job-search thing once, and successfully. That will give him confidence with the process if and when he has to cope with a more typical job market in another location. 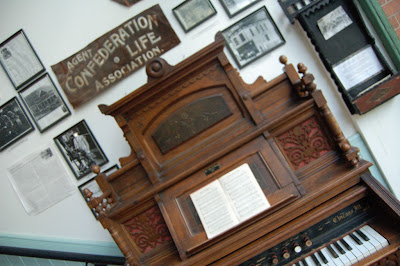 So he puts in four or five full days at the museum every week. He works with one or another of the two main adult employees. They are as different as night and day in some respects, and they don’t like each other much. They never work together; Noah is the primary interface between them — a potentially awkward position to be in. His diplomacy and adaptability has amazed me. I’ve seen it in his peer relationships, but to see him confidently navigating the social demands of these adult-co-worker relationships is really awesome. I won’t share details for reasons of privacy, but there are some considerable interpersonal challenges involved in all this. But … well, some of Noah’s comments about those challenges have made it clear to me what a charitable, empathic and honourable person he is. It’s enough to make me a bit weepy-proud just thinking about it.

I know that Noah has a tendency to be quiet and self-conscious. I wondered how awkward and avoidant he would be with museum visitors. I wasn’t sure how he was coping. When he was exploring the possibility of applying for the job I admit I underplayed the public relations aspect of it, knowing it would make him anxious and possibly turn him off applying altogether. He does not really want me visiting the museum while he’s working, and I’ve respected that, but it’s left me curious about his work persona. Was he very reserved? Was he busying himself with cleaning and administrative work to avoid having to talk to strangers? I knew his adult coworkers were enjoying working with him and had nothing but good to say, but still, I wondered.

Then I met some visitors to the area at Sophie’s Dance Camp. They had been out to Sandon the day before, they said, and had met my son. “What an amazing tour guide he is!” they gushed. “Really?” I said. “That’s great to hear, because you know, well, he can be a bit shy.” “Shy?!” they said, incredulously. “Not at the museum! No way. Not at all! He’s so knowledgeable and personable.” I’d love to be a fly on the wall. And yeah, when I ask Noah about it, it’s clear he’s amiably greeting visitors and doing a ton of the actual guiding and talking — and is pleased that he’s doing well at this. It’s been the perfect summer experience for him.

Plus he’s making lots of money, which he tends to forget about; he periodically remembers the paycheque thing with surprise and delight. He’s thinking of buying an iPhone (outright: no cell plan, at least for now), and a gaming console, and funding a trip to Edmonton to visit friends and attend a music festival.

One thought on “Ghost town docent”