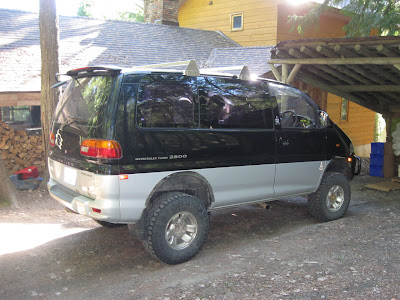 Remember way back in 2008 when I was driving Erin and Noah to Calgary once a month for lessons, and was pining for a Mitsubishi Delica? It would hold our family and instruments and groceries, and would transport the Corazon choir kids, and would get up and down our driveway, and be reliable on our mountain roads during the winter. At the time, Chuck talked me down. We needed a reliable vehicle that could be serviced locally, not an ancient Japanese monster that no one had a clue what to do with.

So what changed? Well, we eked four and a half more years out of the Sienna and although I’m still driving seven kids to Nelson once a week, we’re within spitting distance of no longer needing all that passenger space. Two of those teens are graduating and moving away, which brings us down to 5 passengers and a driver, and in a year and a half Noah will likely move on too. So we still need a minivan, but only for another year or two.

The other thing that changed is that there’s now a service station in Nelson that is specializing in working on these things. 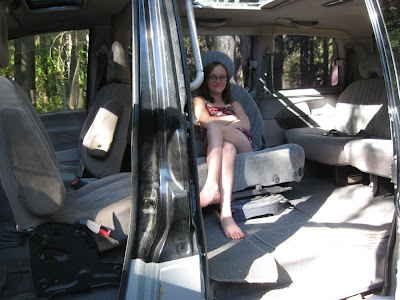 I wrestled with the fuel economy issue. I feel no end of guilt over the fuel we burn for transportation. While living rurally allows us to cut our carbon footprint in several important areas, transportation is definitively not one of them. Part of me really wanted to hold out for a hybrid Toyota Highlander. But we had to buy Erin a violin this year, and a Highlander would have meant making a big long-term (financed) investment. Would we be kicking ourselves in a couple of years, making payments an expensive near-new Highlander when our passenger needs had diminished to Prius proportions?

And really … by owning a minivan we are saving the need for a second vehicle to drive all those kids to Nelson every week. Our minivan is certainly not burning as much fuel as would be required to get two smaller Kootenay-winter-worthy vehicles to Nelson and back.

Besides, the Delica gets remarkably good mileage for a 4WD vehicle. It’s almost as good as the Sienna 2WD which is right near the top for 7+ passenger vehicle fuel economy. No, it’s not a Prius, not a Leaf. But those aren’t realistic for us right now.

We’ve owned the Delica for a little more than a month now. No nasty surprises so far from a mechanical standpoint. Driving it has taken a bit of getting used to. Mostly for the high, truck-like feel. The right-hand drive was surprisingly no big deal. The kids absolutely love it: the modular seating and sun roof makes for a sociable living-room feel in the passenger seats and the rides back and forth to Nelson are quite lovely.