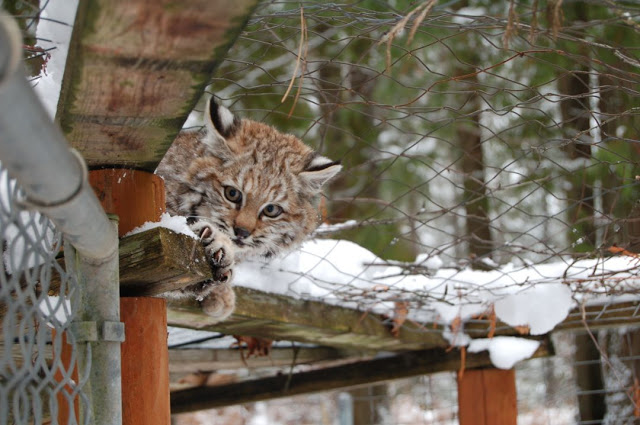 It was the morning before I had to leave for Kelowna to pick up Erin. Noah, Fiona and Sophie had to be got up, the lunches had to be made, everyone had to be fed, coffee had to be made and drunk, suitcases had to be packed for Fiona and me for the overnight, art class supplies and sewing machine had to be readied for the morning’s class. In other words, it was the usual chaos plus a bit more. And of course the chicken feed and water had to be topped up before I left. Ten minutes before we all had to depart, I ran out to water the chickens, and saw something leap up towards the fenced roof of the outdoor chicken run.

And there he was: this guy. About twice the size of a house cat, meaty and substantial with strength and claws and attitude to match. He was trapped there, startled by my presence. I couldn’t see how he’d gotten in, but getting out wasn’t proving to be easy.

I saw no blood or feathers around, and the chickens usually stay inside the coop where it’s warmer, so I wondered if he had maybe just arrived. Perhaps the chickens were still alive, cowering inside. Regardless, I wanted to get him out. I cracked the gate to the outdoor chicken run, just wide enough to admit a camera lens, and took this photo. He growled, hissed and growled some more.

I cracked the gate a little wider and then went around to the far side of the coop, prodding him from behind with a long stick in an effort to encourage him to leave through the gap I’d left him in the gate. He was spitting mad and didn’t want to move. But finally he made a grand leap and ran for it: straight through the little chicken door and into the coop.

I suppose I wasn’t thinking entirely sensibly. I was only thinking of the poor chickens that he might be about to kill. So I ran around to the coop door and quickly opened it, peering into the relative dark, hoping that my appearance would scare him out the little flap-door at the back by which he had come in.

The image was like a split-second landscape revealed by a flash of lightning. I saw, and I slammed the door shut, only really understanding what I had seen after the door was closed. I had seen chicken carcasses: it was already all over for our rooster and four hens who had been faithfully contributing lovely blue-green-shelled eggs to our pantry for a year and a half. But I had also seen the cat, a mere 14 inches from my face, sitting in the nesting box closest to the door, growling his horrid growl, crouched upon his deadly claws.

We now had two minutes until we had to leave for school/art class/Kelowna. Like any reasonable person would, I spent that two minutes uploading the photo to Facebook (thereby alerting Chuck) and then simply drove away, trusting that the cat would eventually leave by the open gate. Which it seems he did.

We dealt with the chicken carcasses another day. I suppose we’ll be back to raising new chicks this spring.