We flew Erin out of Kelowna to go back to school. Kelowna is less expensive from a flight standpoint — and much more reliable in the winter, when the Cancelgar airport earns its unendearing nickname — but it involves eight or nine hours of driving instead of three and unless one is masochistic the necessity of an overnight in a motel. So we’ve tended to fly her out of Castlegar in the summer, and Kelowna in the winter. But this time, with a significant shopping list and two growing girls needing new clothes, we decided to drive to Kelowna and make a bit of a road trip out of it. The Delica makes road trips quite lovely with its bright and airy interior, flexible seating and iPod compatible stereo system.

So we got up early the night after a spectacular thunderstorm and headed out. We dropped Erin off at the airport and headed into the land of big box stores and malls.

Sophie is wealthy from her summer of restaurant work, and even Fiona has accumulated a nest egg from her various bits of paid work in the community and her allowance. So they were happy to meander the mall with their debit cards in hand, sometimes with me, sometimes together, sometimes on their own. Sophie has a self-described addiction to frugality and such a conservative intuition about her finances that budgeting is sort of beside the point: she’ll never spend too much. We first tried releasing Sophie into the wild a couple of years ago on a similar trip and the results were successful beyond my wildest dreams. She spent so little, and bought so much, and what she chose was really neat stuff: appropriate, slightly funky, stylish, and well-balanced to her needs. With Fiona it’s hard to say how she’ll do managing all her own purchases; right now she’s so limited in choices by her tiny size (girls 8) and relatively sophisticated sense of style that there’s a completely justifiable tendency to snap up whatever works. (In our area, the only store selling clothing in girls’ 6-14 sizes is the Walmart 90 minutes away. The consignment and thrift stores there rarely seem to have much either, as I suppose there are scores of girls facing exactly the same dilemma who live nearby and can snap up things as they come in, while we can only check every few weeks.)

We spent the night at a nice motel with a pool and waterslide. The next day we meandered around the city, shopping for the various household items on our list. And we checked out the most amazing hole-in-the-wall-of-and-industrial-area diner-type restaurant. 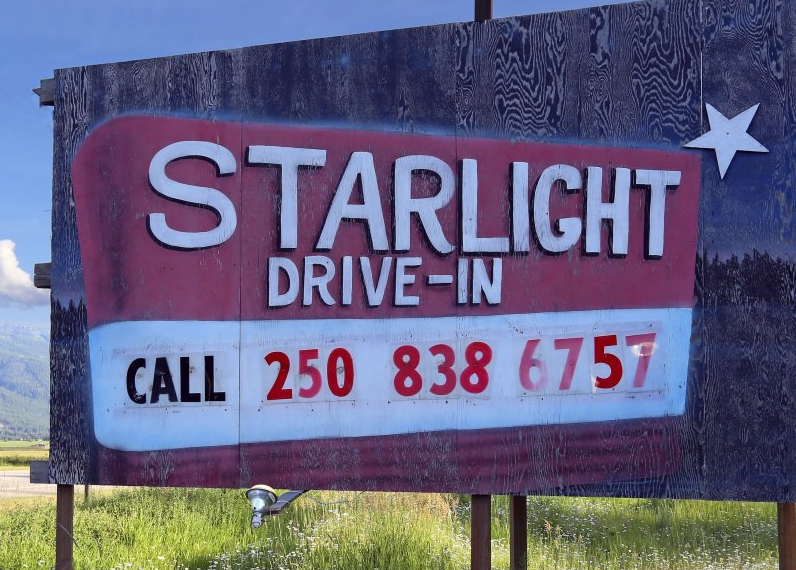 Then we headed north, taking the long way home. Our first stop was in Enderby where we snagged a cheap motel and then went to the drive-in. I had last been to a drive-in in about 1990 with Chuck in our cranky VW Westfalia. We’d found a spot in the back row, popped the top, and watched Dick Tracy from the upper-level mattress, propped up by pillows and frosty beverages from the fridge below. Even then it was a sort of retro experience that we felt lucky to be able experience. Now, 23 years later, that theatre is closed and the Starlight is one of few remaining drive-ins in Canada, one of only three in BC, and the closest to us by far. It seemed like something the kids should experience at least once.

We parked backwards near the back of the theatre, opened the hatch and laid the back seats out flat. We made a trip to the Snack Bar for all the standard fixings. The rear bumper of the Delica made a lovely shelf for drinks, and the popcorn bags fit nicely in nooks to the side of “bed.” 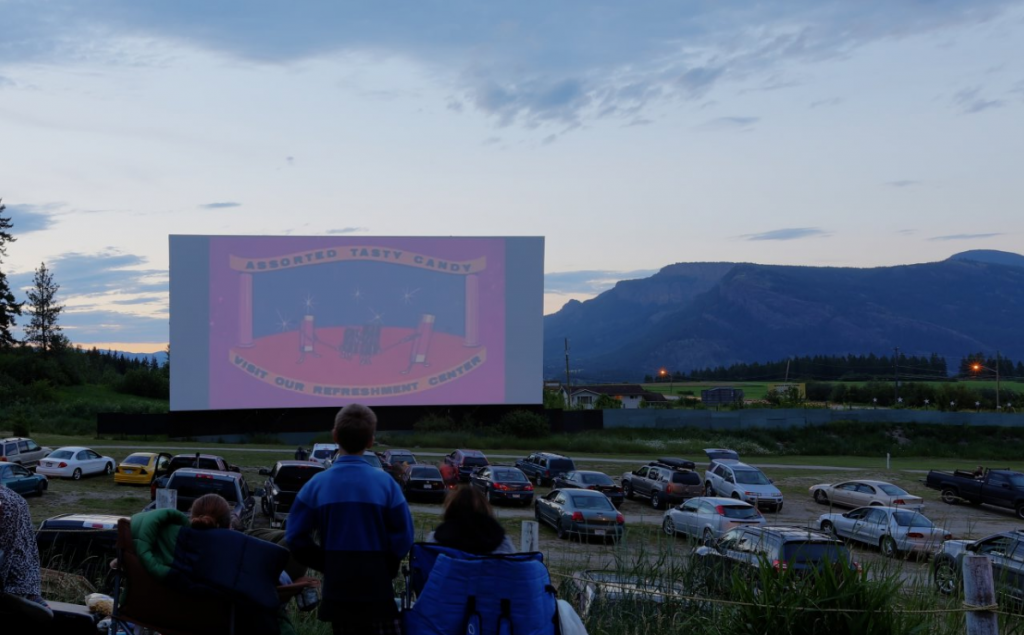 It was a pretty awesome experience. The weather was lovely: we were warm with just regular clothes. The audio channel broadcast 1950s and 60s tunes about cars and car culture. The van was comfy as heck. The girls’ favourite part of the showing was the 1950s cartoons beforehand, complete with little animated chocolate bars doing tight-rope dances, and reminders every sixty seconds that “the show starts in ____ minutes.”

We watched Pacific Rim, which was fine. The content of the movie wasn’t why we were there, of course. We were super tired, so we didn’t stay for the second show.

The last day we drove north again to pick up the TransCanada highway before heading east and then south again to get back home. This brought us alongside the CPR at the site of the completion of the trans-continental railway in 1885, the famous Last Spike locale in Craigellachie, BC. Fiona and I have been reading our way through pieces of Canadian history over the past year or two, and it seemed only right that living so (relatively) close to this site we should stop and visit. After that we went on to visit the Revelstoke Railway Museum to complete the day. We had driven by it many, many times on our trips to and from Calgary getting Erin to her lessons there, but we’d always been focused on just getting the trip over with and the kids had never wanted to stop and explore. So this time we did and while it wasn’t exactly the most mind-blowing museum we’d ever been to, Fiona did get her model-building ambitions extremely excited upon viewing the huge model railway on display, as well as some of the other diorama exhibits.

Then it was a familiar hop-and-skip across the ferry to home. Noah had finished his last couple of shifts in Sandon. Sophie has a weekend of restaurant and baby-sitting work but has Labour Day off. And then the big kids are back to school and the rhythm of life will change and it will truly be fall. It felt lovely to grab a last few footloose days of summer.