Where has October gone? Where has my blogging mojo gone? My additional teaching load, and all the juggling of travel and activities by Noah and Sophie, is taking a toll. 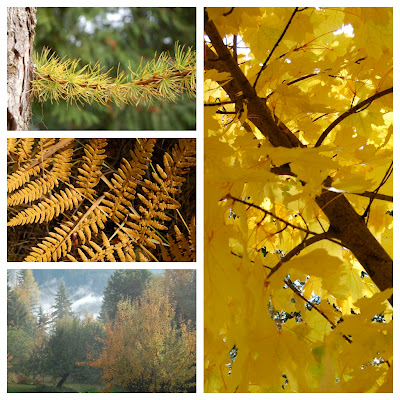 Fall was amazing until the rain finally caught up with us. The leaves were a good two weeks later to start turning, and then when they did it was in a flash of gold glory. Still it was sunny. And (relatively) warm.
Now it’s been raining for a couple of weeks. And cold, and grey, and dark. The wood stove is working all the time and we’re inside a lot more. 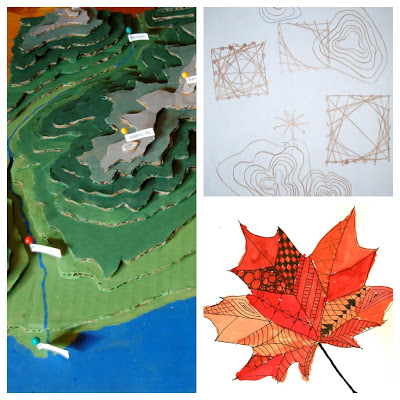 Fiona has been doing a lot of neat art and math. The topo map project (previously mentioned) but also a lot of Vi-Hart-inspired doodling, zentangle style art, and circle-geometry stuff. The art classes that were offered last year to homeschoolers are underway again, and this year’s focus is mathematics and patterns in art, which is just a perfect fit for Fiona’s current enthusiasms. An art class where the vocabulary frequently includes words like radius, concentric, tetrahedron, equilateral, rotation and intersection? Right up her alley! They’re currently working on making mandalas, using various paint techniques, geometry with compasses and straight-edges, and carved print blocks. 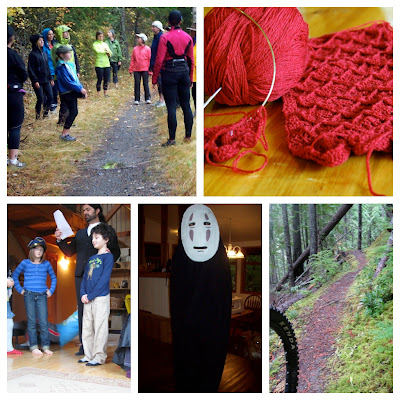 A last few tidbits, clockwise as above.
We’ve been doing some organized running clinics. Fiona attended the first one and enjoyed it. I’m going to continue doing some regular Sunday clinics in a neighbouring village. I am trying to work up interest in an ongoing local running group, so I’ve put some time and energy into hiring a clinician, setting up an email loop, and doing publicity.
My knitting bug has hit again, with the stoking of the wood stove. The only local yarn shop (90 minutes away) closed last spring, so I shall have to find a good on-line source for yarn. It’s a shame not to be able to see colours and touch hanks in person though.

My networking with other runners and cyclists has made me keen to get to know even more of the local wilderness. Last weekend I stumbled on a fabulous trail that I had never heard about. A well-kept secret, I suppose. It’s low-elevation, easily accessible, rolling in profile, quite and stunningly beautiful … yet very close by. How could I not have known? I’ve biked it and run it and loved it both ways. It’s made me hungry to truly and thoroughly get to know the backcountry around here. In the last couple of years I’ve got a good handle on the trails between my area and town. But that’s just a wee portion of what’s out there. I want to get back into backcountry hiking and camping too.

Fiona dressed up for Hallowe’en as No Face from the Studio Ghibli anime movie Spirited Away. An easy and warm costume for a typically cold and wet Hallowe’en.

The Law and Government classes are drawing to a close. These fun theatrical classes about the evolution and structure of our constitutional monarchical government system have continued sporadically throughout the summer and into the fall. Fiona has continued her role as Head of the Executive branch of government, but she now has a new role as Miss Matter, a witness for the defence in the case of against Mr. and Mrs. Brown, who have refused the installation in their living room of a video surveillance camera according to Section 10 of the Kingdom Security Act designed to protect against the rumoured terrorist plans of Evil Lord Voldesnort. The mock trial is scheduled for the Nelson Courthouse in a couple of weeks.