Recently Fiona has been fascinated by Vi Hart’s quirky art-in-math videos. She’s made Fibonacci spirals, binary trees, trihexaflexagons and various other doodly-mathy things. Recently she noticed how a particular style of spiral doodle looked a bit like topographic lines on a map. And as she didn’t really understand how topographic lines worked, I explained them to her, and printed out a topo map from our area. I also suggested it might be fun to someday cut out and stack layers of cardboard using topographic lines as a guide to create a three dimensional model of the topography of an area, real or imagined. 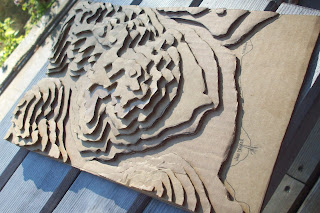 Well, she wanted to do that right away. So we found a couple of old cardboard boxes, traced over the topographic lines on the map we’d printed out, and started cutting. One topo line at a time we cut out our paper map contours, traced them onto cardboard, and cut each layer. Fiona glued the layers together and was entranced as the topography began to take shape. The creek drainages, and the peaks, the valleys, the ridges. 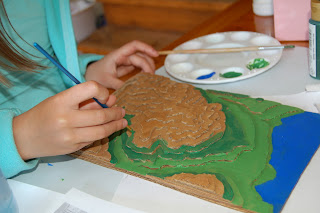 A layer at a time, with bright and darker greens and greys. She used acrylic paint for its forgiving nature and opacity. Of course the open corrugated edges weren’t really filled: I wondered about smoothing everything out with some polyfilla. But in the end I didn’t suggest that because I figured the real point was to notice the way in which topographic lines on a map, which are so beautifully visible on this model, allow one to approximate the three-dimensional shape of the terrain.

After the painting was done, we looked at the model without the map, and tried to identify peaks and locations. Then we got out the map to check and get a bit more precise with our locations. And we decided to repurpose some sewing pins into map pins, and mark a few places with names. 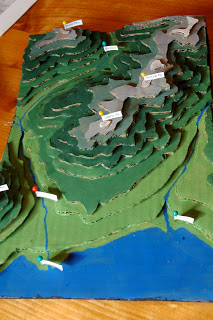 Fiona is very pleased with the finished product. It took us two pleasant afternoons, totalling about 4 hours. We worked together part of the time, and sometimes I read aloud while she worked.

(We have a few of these picture-perfect unschooling days a year, where a thread of interest turns into an interesting project and results in some awesome photos. I always blog about them because …. well, because they’re noteworthy. Not because they’re typical.)