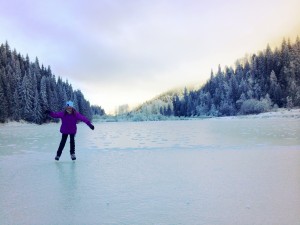 It happened in 2007 and again in 2011. The lakes at the summits froze solid and thick before the snow started really flying. For a precious couple of days we had the world’s most beautiful ice rinks at our disposal.

And this year it happened again, to both nearby lakes. The lake to the east is upon an little-travelled road. Although small it has the most spectacular scenery and is typically completely empty. The ice there was flat and clear, and if not entirely smooth it was certainly smooth enough to be enjoyably skate-able. 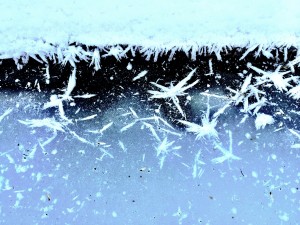 Fiona and I spent a terrific part of one morning exploring it from end to end, peering through the dark ice at the suspended ecosystem below, photographing amazing hoar crystals and carving long S’s across the surface. Sophie had wanted to skate with us, but school and her unrelenting roster of after-school commitments got in the way. “There are a few truly awesome homeschooling perks,” I told Fiona. “This is one of them.” 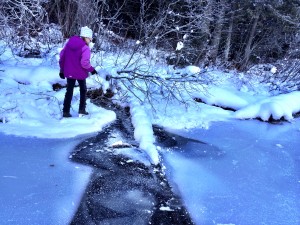 “Yay!” she exclaimed. “This totally makes up for me not having any friends!” She was saying it for comic effect: she definitely understands all sides of the ‘socially isolated homeschooler’ issue, and recognizes that not only is she not particularly isolated, but going to school full-time wouldn’t answer to her social needs anyway. She’s just got that dry sense of humour. But it made the stark lonely photos we took kind of poignant.

Sophie of course still wanted to skate and fortunately the clear cold weather held for a couple more days. We heard through the local grapevine that the ice surface on the lake to the north was just as clear of snow and even smoother. So on Friday I picked her up after school and we headed out as quickly as we could, arriving about 10 minutes before sunset. This lake is bigger: almost 5 km from end to end. As we had been told, the ice quality was absolutely fantastic. There wasn’t a ripple or bubble anywhere. There was about a centimetre of fluffy snow covering the surface, and more was gently falling, but we soon realized that there was absolutely no need to be concerned about the quality of the ice surface beneath the snow. It was pristine. Glassy. Perfect. 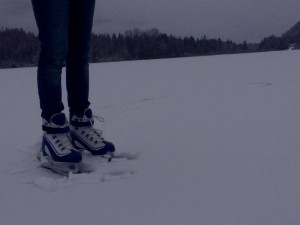 We’re not great skaters by any stretch. The older kids had a few lessons on the local curling rink years ago when they were little tikes. I learned to skate more or less alongside them, having only skated a few times as a child myself. We’ve had a small backyard rink a few times in past winters, but really we’re novices. Still, despite our middling skills and basic form, on the magical surface of that huge lake we knew we needed to skate for all we were worth. We needed to skate the whole lake, even if dark fell. 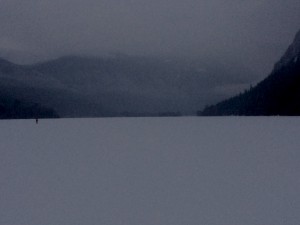 We did a total of about 9 kilometres. The skiff of snow amplified the lingering late dusk. It took us almost an hour to do the circuit. Sophie, wearing Erin’s old skates, was nurturing along some impressive blisters, but she didn’t care. We just kept going. We skated around islands. We skirted the shore. We traced knife-like marks with our skate blades wherever we pleased. We listened to the curious hollow thud of each others’ skates making contact with an immense and resonant sheet of crystalline water. By the time we finished it was so dark we could barely find our boots and our parking spot.

That night the temperature rose to zero and the ice was ruined for the year by a temporarily stodgy layer of snow that got fused to the ice. The magic was over, for this year at least.