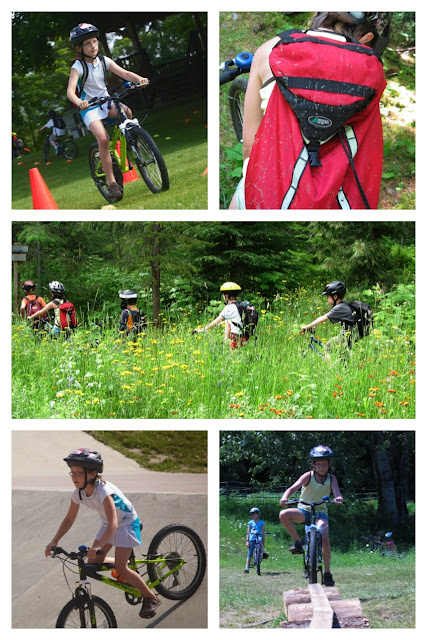 Finally the cold rainy spell broke. We had rainfall totals for June that were almost twice the previous record. There were two weeks of mountain bike camp and luckily we chose the second one: the first week of July was still suffering from temperatures barely in the teens and torrential downpours. This week, though … sun and soaring temperatures!
What a great week for Fiona. It was hard work: she was on her bike for most of the five and a half hours each day. There were drills around pylon courses and over small obstacles on the field, time to experiment with gravity and momentum in the concrete of the skatepark, skinnies, teeter-totters and ramps at the bike skills area, and every day included a long trail ride.
My friend who organizes the camp does a great job with the logistics, selecting the coaches, organizing the shuttle service, keeping the kids engaged. There were thirty kids enrolled in each of the two weeks. The camp was held in the village 30 minutes to the east of us. I drove over and stayed most days rather than making two trips, which meant I was available to be the sweeper at the tail end of the trail rides. Beside putting chains back on kids’ bikes, wiping up occasional bloody noses and helping the laggards out occasionally by pushing their bikes up the steepest and hottest of hills, it wasn’t much work for me and I got the chance to get to know some of the trails better.
Fiona has grown so much more confident on her bike. We bought her a snappy little aluminum Specialized hardtail this spring. She rode hard, generally at the front of the pack. She got very skilled at technical downhills, balancing her weight well and using her brakes properly to avoid going head-over-handlebars. She pushed herself to try new things and showed incredible tenacity on the most challenging “skinny.” She made it all the way across the 10-metre-long 2×4 several times after scores of tries.
Mountain bike camp