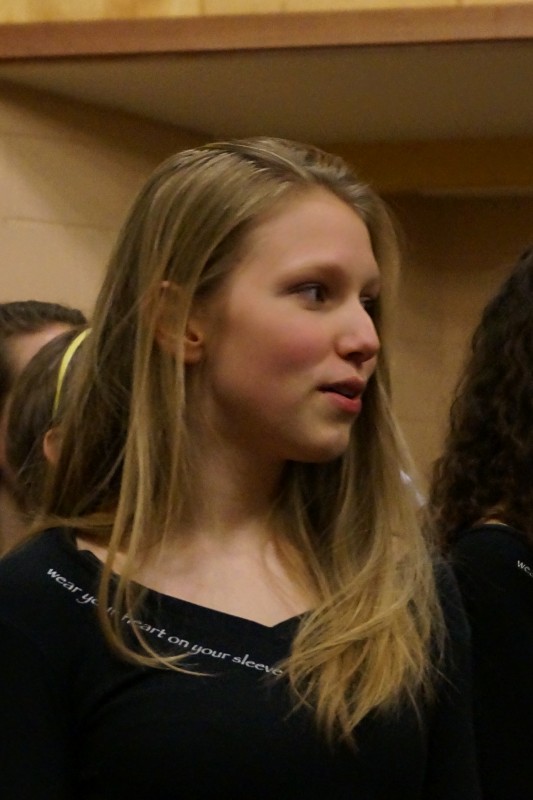 The same cherry tree that Fiona’s picking the fruit from: Sophie is climbing amongst its tangled branches. I love our local school. The teachers and staff are fabulous: interesting, passionate people with wonderful talents and the best interests of their students at heart. The school is tiny — about forty high schoolers, and a similar number in K-6. The small size leads to amazing amounts of flexibility and individualization. In both philosophy and practicality the school is open-minded, community-spirited and characterized by integrity and common sense.

This year the high school end of the school moved to a new instructional model for academics with primacy given to Independent Directed Learning. This approach to academics is combined with electives, many of which are done as Immersion Weeks where students take time away from regular schooling to do nothing but the elective topic of the week. The academics are largely self-paced with the work done independently from textbooks or computers during numerous study-hall-like blocks. These are punctuated by weekly or biweekly Seminars which are a chance for occasional group projects, discussions, labs or more traditional teaching.

Unfortunately the school’s tiny size and remoteness create limitations for a certain kind of student. Sophie is that kind of student. While she is very adept at the organizational and self-teaching skills needed for independent work, she is beginning to want for the sense of learning community that she would get in a larger school. She’s nominally in Grade 10, though her academics are pretty much all Grade 11 courses, and the classroom groupings include Grade 10, 11 and 12 students. For this year she does have some others working at her level amongst the Grade 12 students, but they’ll be graduating next spring, and her fellow Grade 11’s are mostly in applied-stream courses. So after this year she’ll essentially be in a classroom of one.

A classroom of one worked well for Erin, because she was challenged and engaged by everything she was doing outside of school. She was busily practicing violin for hours a day, travelling extensively for her violin and piano lessons, working part-time, travelling abroad. If some of her school courses were done independently that only worked in her favour because it gave her the flexibility to work on her own time wherever she happened to be. Noah has done fine in the same school partly because he’s more of a lone wolf by nature, and partly because the demographics were different for him: he was swept along during his Grade 10 and 11 years by a lovely cohort of bright and highly motivated older students who created an intellectually vibrant environment in his classes. With just a year to go following their departure last spring, he’s managing to keep himself going — and he does have a few quirky but interesting Grade 12 peers.

For Sophie independent learning in a classroom of one would be fine if she had just a year to go after this year’s grads leave, but she needs to complete two more years of school after this spring. She’s only just turned 15, so is in no rush to graduate, but it does make one wonder exactly how she’ll fill her final two years. Her core academics will be easily completed next year.

Being academically accelerated offers the advantage of being able to broaden out a bit and challenge oneself with a range of enrichment options during the final couple of years. The problem is that Sophie’s school doesn’t even offer some of the courses that are considered basic high school fodder (French, Calculus, English Lit., Geography and Physics, for example), let alone fancy academic electives like Law, Latin or Psychology. And the non-academic electives tend to be introductory courses considered suitable for the Grade 7 and 8 students, with a bit of differentiation for older students. They were great for Sophie when she was younger, but three or four years later the same type of introductory Drama or Foods course is not going to optimally enrich her education, especially not when she’s taking the course for the third or fourth time. It’s true that she can access a wide variety of courses on-line, but already most of her course-work is independent in format.

Sophie seems bound for a post-secondary career in the sciences; she is a very high achiever, especially given her acceleration. She wants challenge, she wants a richly academic high school education, and she wants to be amongst a community of fellow-learners who are similarly engaged in their learning. She feels rather miserable when she contemplates her prospects at the local school once the current Grade 12’s graduate.

And so we are beginning to look at alternatives for her last two years. Obviously homeschooling would be an option, but she is the sort of person who prefers the straight and narrow course to university. Having dedicated more than two years already to the high school pathway, and basically liking the structure and community that a school can and should provide, reverting to unschooling isn’t her preference. We’ve talked about international travel, and the costs, and the academic unknowns, and her age. We’ve thought about whether she could live with relatives elsewhere. No easy answers present themselves. A nearby school looks like it could give her the right environment, but it’s only nearby in the rural Canadian sense of the word and it would require her to live away from home during the week. Still, that possibility is at the top of the list right now.

I love our school, and somehow it feels dreadfully disloyal to consider pulling Sophie from their roster to place her in a different school. Especially while they’re offering Fiona such a feast of perks and accommodations. Enrolment is declining, and several Grade 10s and 11s have already left for larger schools elsewhere. But I guess we’ll flee this cherry tree for another if Sophie’s social and educational happiness depends on it.

In the cherry tree

7 thoughts on “In the cherry tree”