I had to go pick the van up. With our family shrinking, and the monthly trips to Calgary no longer happening, my desire for a more winter-worthy minivan is no longer a pressing need. We decided to put some work into the Sienna. I took it in to get the catalytic converter replaced to fix the “check engine” light but it turned out that there was several thousand dollars of more urgent work that needed doing. Oh dear. They kept it for a week. We enjoyed a light little Corolla loaner. Then it was time to go retrieve the Sienna, and pay the bill.
Fiona had been wanting to visit the east side of Kootenay Lake to see the artisans. The last time we had been there she was too young to remember. There was a Barefoot Running Clinic in the village to the east of us that morning, so we decided to go a meandering eastern route to Nelson to pick up the van.
First we stopped for the running clinic. I had heard that the clinician had run more than 6000 barefoot kilometres on trails and was hoping for some tips on sole conditioning, so that I could begin to more effectively marry my two running loves: barefoot, and trails. So far I can only run real distances barefoot on roads. But alas the clinician had run “barefoot” on trails, not actually barefoot. As in, wearing minimalist shoes. To me, running barefoot means, well, like, not wearing shoes. I’ve begrudgingly accustomed myself to the marketing term “barefoot shoes,” but I still think that “barefoot running” (as opposed to “barefoot-shoe running”) should refer to skin-to-ground.
Ah well, the clinic was an excellent introduction to minimalist running and barefoot-style form. It seemed to be exactly what the majority of the participants wanted and needed. I didn’t get anything much out of it, but it was nice to see so many enthusiastic runners, most of them newbies.
After that Fiona and I grabbed some lunch and headed down the lake to catch the Osprey 2000. This is the big ferry. We’re used to taking small ferries across Arrow Lake, the simple flat-deck ferries that carry a dozen or two vehicles and offer as amenities a couple of garbage cans and a collection of tourism brochures. The M.V. Osprey is a different animal entirely. It carries up to 80 vehicles, takes more than half an hour for the crossing, and has an observation deck, a lounge and a snack bar. Better still, as part of the mainland highway system, it’s free!
It’s on the way to Cranbrook, where we play in the Symphony, so I’ve taken the older kids on it several times in the past year or two. But Fiona hadn’t been in ages and didn’t remember it. She was entranced. The weather was lovely. We visited the snack bar for drinks. We stared out the big windows in the lounge, we let our hair be blown in the wind on the observation deck.
Then when we got to the other side we drove 5 minutes to Crawford Bay. Here there are a collection of artisans with open workshops, gift shops and displays. The blacksmith wasn’t working, but that was no big deal: we have one of those at home. We did spend a fair bit of time watching the lady enamelling glass onto copper, looked at the blown glass, perused the pottery studio, and spent a fair bit of time at the weaver’s store and studio.
Janet, the primary weaver, was out of the studio, which was too bad, because she’s the elder sister of a very good friend I grew up with in Ontario. I’ve met her a few times and she’s lovely. But the best part is that I have this memory of the mysterious Janet coming to visit my city in Ontario when I was maybe 13 or 14. She was living in the mountains of BC; she had a bunch of children, they gardened, they homeschooled, they lived in a log house off the beaten path, far from highways and airports, they lived in the forest, they baked their own bread, they hardly knew what TV was. It seemed so exotic! And now, except for the TV part, I’m living more or less the same life a mere 60 miles as the crow flies from her.
Anyway, we stopped in at the broom-maker’s before heading back to the ferry. Broom-making is such a quirky craft: definitely not something you see at every historic village or craft fair. We own a couple of their brooms already. I love watching the weaving and finishing process. 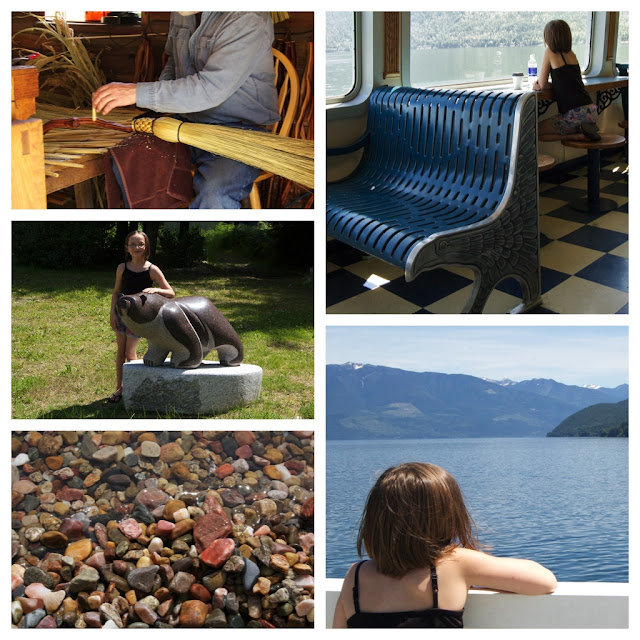 We had time for ice cream and beach-combing before heading back. The pebble beach featured some lovely shades of weathered quartz that we don’t see much on our stretch of lake. Naturally we brought a few pocketfuls of special stones back with us.

We made it to Nelson in the nick of time to retrieve the (expensive!) van. It was a great way to spend a day. As is typical, we don’t often make the effort to be tourists in our own neck of the woods. Every summer we vow to delve more deeply into what our area has to offer: there is so much to see and do right out our back door. This day was a good start.