Four times I fretted over what to do with the kids when they finished the Singapore Primary Math series at relatively young ages. Were they ready to move into Singapore’s high school series, or a traditional US-based high school math program? Which one? When? Should we even be using a curriculum? If so, to what extent should we be structuring the work in it?

With Fiona the issues seemed even more stark, as she had finished Singapore series even younger and was even keener to barrel ahead. What we ended up doing was to leave math very unstructured for well over a year. She dabbled a bit in Challenge Math, and of course her curiosity about math continued to be exercised in interest-led ways with questions and ponderings, but we mostly let things gel. I didn’t go out and find the next Singapore program. I didn’t really do anything.

Shortly after she turned 10 she found an 8th grade school workbook at the back of the classroom where we were having our homeschool art classes. Surprisingly it looked pretty appealing to both of us, quite Singapore-ish, in fact. It was called Math Makes Sense, and although the content was a step more advanced than Singapore 6B, it still had the spare, unintimidating layout of a workbook with lots of white space and not too many questions per page. Even better it seemed to walk a sensible line encouraging both computational clarity and deep conceptual understanding.

That book was a little below her level, so she completed it over the space of three or four months at the end of last school year. She was interested in joining the Grade 9 class for in-school math learning the following year, so she wrote the final exam with the Grade 8 kids and aced it. And so last fall she was welcomed into the classroom and given the MMS Grade 9 workbook and textbook.

As it turned out in-class learning was useful mostly in that it reminded her to keep plugging away at the curriculum when life got busy or when some sort of obsession (mainlining a TV series or reading a novel a day) threatened to trap her in her bedroom forever. It was sort of nice to know that there were a few other kids working through the same material, but the classroom was multi-grade with her at the top end academically but off the bottom end for age, so it wasn’t like there was a perfect little cohort for her to join. The other kids were moderately annoying in their distractibility and distractiveness and as the year went on she often preferred to work at home.

She finished the Grade 9 program in March or April, got 95% on the final exam and decided to move ahead. We have no expectation that she’ll rollick through the Grade 10 program as quickly as she has the previous levels. Grade 10 represents the first bifurcation in math streams in the BC school system, into academic and applied courses, so her current course is the first that’s specifically intended for students on a university track. As such it will likely be a weightier course with more challenge, and it may take her a bit longer to work through. The academic stream splits again after Grade 10 into courses intended for students planning post-secondary math and science studies and those heading into arts and humanities, so things will likely jump up a notch in difficulty again at that point. 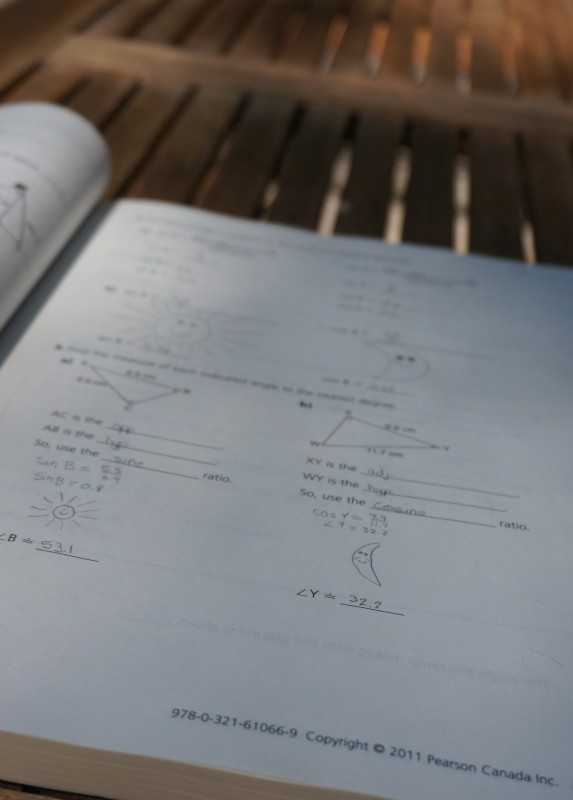 Having said that, over and over I’ve expected Fiona to hit a wall in her math studies, where her maturity just isn’t up to the level of complexity and abstraction, and it just never turns out to be the case. She’s almost a third of the way through the Grade 10 program and she loves it! Every time she sees our liaison teacher she tells him how much she loves trigonometry. Her workbook is peppered with smiley faces and happy cartoons like the ones in the photo.

We are forever thankful to her liaison teacher and the local public school that they’ve been so open-minded and supportive of her math education. We’ll have a change of both liaison teacher and school principal next year, and are keeping our fingers crossed that the current mindset will prevail. We hope she’ll be able to use the classroom when she wishes and write tests and exams in the school environment at whatever pace works for her. I hope we will have the option to perhaps not formalize the credit and standardized provincial exam (which normally take place at the Grade 10 level in BC) on a high school transcript just yet since that can have implications for university acceptance and I don’t think she should really be under any kind of pressure at this age.

So who knows where this path will lead? She is enjoying the journey and the scenery along the way. She doesn’t spend a lot of time on math — certainly less than is typically allotted in a school environment — but it comes easily and she is always the one who decides when and whether to work at it. These days she likes to work at math on the deck in the dappled shade of a warm afternoon with the hummingbirds zipping by. Homeschooling certainly has its advantages!