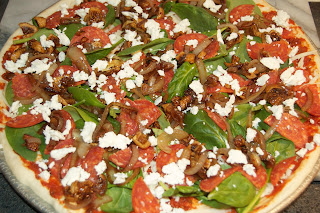 We make pizza almost once a week around here. It’s a flexible go-to meal for us. So long as someone takes ten minutes to get the dough started sometime between 2:30 and 4:30 pm, it’s a quick and easy meal that we can all pitch in to get made in less than half an hour (plus baking time). 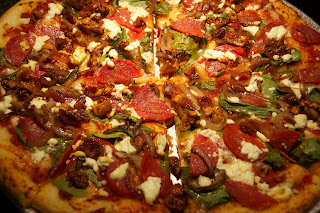 Over the years our toppings have gone through many evolutionary steps. There were the early years when certain kids would not eat anything that wasn’t approximately white, so we’d cook one pizza with only cheese, just a molecular layer of marinara sauce, and sometimes a sprinkling of corn kernels. There were the years none of the kids would eat mushrooms, or olives, or peppers … and so we made one of two pizzas with those things omitted. And then when we had a mix of vegetarians and carnivores, we would have a veggie pizza and one with half meat.

Now with more mature tastes and the demise of our vegetarian ways, anything goes. And this week we adapted one of our favourite panini recipes to the top of one of our pizzas. (The panini omits the marinara sauce and mozzarella cheeses.) The pizza toppings are:

Mix, adding flour gradually. Stand mixer with dough hook makes it easy. Allow to rise covered in a warm place until doubled. Punch down, roll/throw/stretch out. Makes enough dough for one 16″ pizza.