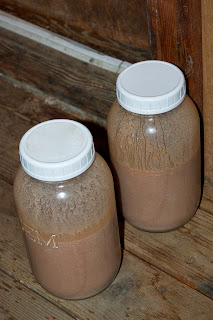 There was no Christmas in this family. We went to my mom’s and ate her turkey. But other than that, no Christmas. We’re waiting for Erin to get back from China next week, when she’ll stop in for a week’s visit.

Irish Cream. We’ve been making it, 3 litres at a time and enjoying it a tiny glassful each of us each night after dinner. It needs to be refrigerated, but our fridge was very full, so we put it on the deck. One day there was only one jar there. We looked around and found an empty jar on the snow on the lawn with the lid chewed off. The dog was discovered to have a very raw-looking (much-licked) snout and a complacent demeanour. We have made more room in the fridge.

Chuck bought a big TV. We had been using an old 27″ model that was deeper than it was wide. Now we have a wall-mounted 46″ expanse of perpetual programming. I suppose the novelty will wear off and it’ll get shut off from time to time. It’ll be nice for DVDs and such, but so far it’s not talking very well to the input components and we’re waiting for a swanky HDMI cable that’s on order.

Human Planet. Great new BBC series we’ve been watching, similar to Planet Earth and Life but focused on human adaptations and innovations in extreme environments. Looking forward to watching it on the TV. For now, my iMac suffices.

We killed animals. My way of making peace with no longer being a vegetarian (since I was the last holdout non-meat-eater in the family). I figured that if I could kill some of our chickens with my own hands and eat them, I could then eat meat in good conscience, in full appreciation of the ethical and practical implications. So today we killed our excess roosters.

I’ve been running. I managed to do 53k last week, plus some crosstraining. This week will be busier, so fewer miles, but I’m off to a good start.

The kids are back to school tomorrow. We’ll celebrate Erin’s birthday next weekend, Festivus the following weekend and Fiona’s birthday the weekend after that.

Animals, Family life, Family Matters, Out on the property, Running