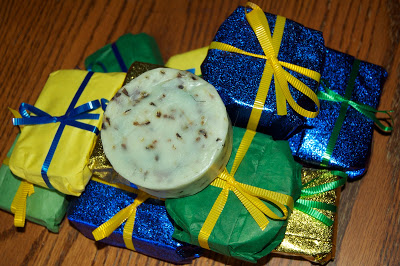 The soap has cured! We’ve wrapped it up in salvaged tissue paper and ribbon, to keep it protected until use by us or others. While the lavender buds turned a less-than-fetching brown in the alkaline environment, the basic marbled green of the soap is nice to look at, and the mixture of lavender and rosemary scent is just right.

The power was out most of today and this is one of the things Fiona and I did to fill the time.

Today we also enjoyed having three teenagers in the family for the first time.  Sophie has joined Noah and Erin on the far side of twelve. Plans for birthday dinner and coconut cream pie were almost foiled by the power failure, but the electricity came on just in time for us to squeeze the cooking in.

I would wager that Sophie has felt thirteen for a while now. She joined Corazón (nominally for 13 through 25-year-olds) in September. She’s been one of the youngest students enrolled in the local public high school this fall, through school-wide multi-day field trips and multi-grade workshops. Her social affinities have always tended to run a little ‘old.’ And she’s a well-grounded, mature kid, with a solid sense of what’s right for her and of what she likes.

Now it’s official. She’s a teenager. As always any nostalgia I might feel for the little-kid days is far outweighed by the excitement and pride I feel watching my children grow into such interesting and capable young people, ready for adventure, quirky as heck but as loveable than ever.