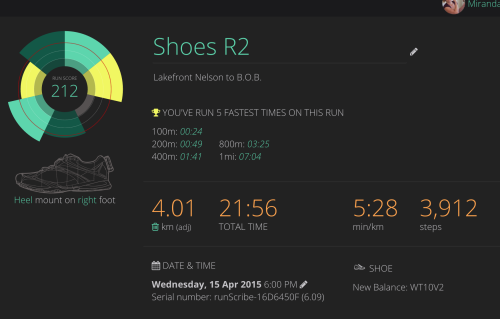 Look, data! Running data! I admit I readily get too obsessed over this stuff, to the point where I forget why I run. (Note to self: I run for the happiness it brings, to clear my head, to learn how to be in the moment, to stay strong and fit, to be out in the natural world, to challenge myself physically, to improve my physical and mental stamina.) In the interest of not distracting myself with data I’ve given away my Fitbit and retired my ancient Garmin; I don’t even own a functional watch. I confess that sometimes I still run with my iPhone tracking my route and my pace, but I make sure I don’t check my stats until after I’m done.

But now I have this little runScribe device I’m beta-testing, and it is pretty awesome. It gives the standard kind of feedback about pace, speed, splits, number of steps. But then, oh, but then…!

It tracks detailed kinematics of my running gait, step by step. Above is a hilly run I did yesterday in my New Balance Minimus Trail shoes. The hills add a lot of variation to the information, which makes for a very complicated but interesting data set. You can see the hills most clearly in the orange line, which shows linear deceleration due to braking. Where that line is high, I’m running downhill, putting on the brakes. The green line shoes my stride rate which slows considerably below the optimal 90-ish per minute during and for a while after the downhills — not surprising. And the yellow line, which is my contact time with the ground, is roughly inversely proportional to the stride rate, meaning the more quickly I’m stepping, the shorter my contact time with the ground: no saggy, exhausted shuffling showing up. In general I think things look pretty good, which probably because I’ve paid a lot of attention to my running form over the past five years. It’s nice to see some evidence of the good stuff. The blue line shows that I’m clearly a mid-to-forefoot striker rather than a heel striker, and my cadence/stride rate on the flats is pretty close to 90.

RunScribe was a Kickstarter project which is just reaching fruition. It’s available for pre-order only at this point. I volunteered to participate in beta-testing, so I’ve got an early release device. It mounts on the laces or the heel of the shoe and talks to a smartphone via Bluetooth, and from there to the internet. Among other things I’m helping them look at creating a FootStrike Processing Software Engine that accounts for barefoot running, since the current software doesn’t do a good job with this. Overall the interface is a bit buggy but improving quickly as the team tweaks things at their end. It’s working really well for me now, at least when I run with shoes.

Next week I’ll start collecting data from my left foot and comparing. That will be interesting and probably quite confusing. I have a chronic bursitis behind my heel. Ideally I’ll get some clues as to why I’m having such trouble with my left foot, but I likely won’t be able to tease apart the causative mechanical habits from the resulting compensations due to pain and stiffness. Still, there will be graphs, and they will be epic.