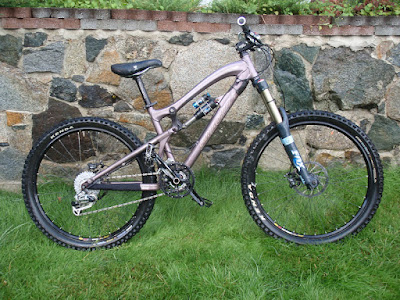 The back-story is that I hurt my foot in August (not running — while scooting up the property to check on the water reservoir, of all things). But I was unable to run. With the family reunion, and then the fuss of getting Erin off to Montreal and getting the middle kids off to school and that whole routine down, I coped with the layoff. But as I got into the routine of September the not-running began to drive me crazy. So I started riding. Sometimes on the road, but often on my running trails. Once Noah and Sophie were home from school in the afternoon, if there was nothing pressing I’d grab a quick hour-long circuit on the Galena and Creekside Trails.

Off-road I was riding my 20-year-old Stumpjumper which I’ve kept tuned up as best I can. But it’s in desperate need of a whole new drive-train, derailleurs and some front shocks. Lots of missing gear teeth, seized adjusters. Expensive stuff.

This fall Chuck announced he was looking for a new mountain bike. Since he has a couple of old mountain bikes at his disposal and has probably ridden only half a dozen times in the past dozen years, I must have given him a quizzical look. He told me that he wanted a full-suspension (i.e. expensive) bike, because he thought if he had a new, up-to-date bike he would be more likely to go riding.

Well, he bought himself a decent used all-mountain dual-suspension bike and … okay, I had to take back the eyeroll. I tried his bike. Amazing! Totally different kind of ride. Gears that shift like butter, brakes that engage with a casual flick and pull you to a gravel spraying skid stop with a gentle squeeze.

I lucked into the Santa Cruz Nomad. I found it in Nelson, selling used at less than half its original $3000+ price tag. It was my size and it’s got some pretty high-end components. It’s been ridden hard, but it’s been well-maintained.

I’ve only got about 50 kms on it so far, and it needs a bit of a tune-up, but still, I’m blown away. I can ride up pitches I couldn’t dream of doing on my Stumpjumper. I can down-shift while climbing hills (rather than beforehand), I can stop on a dime using a fluid balance between front and back brakes to prevent fishtailing or pitching over handlebars. And downhills … I can handle steeper, and go faster by far. The suspension prevents most of the jarring over roots and rocks, and that increases stability and safety on the rough trails I tend to ride. It’s not a boneshaker like the Stumpjumper, bouncing its way down the slopes in a cacophony of rattles while I stand out of the saddle for the entire descent. Instead there’s a sense of fluidity and control.

I’m back to running, but bike rides aren’t going to lose their appeal because of that — now I can do both!

One thought on “Bike”