I bought myself a new bike. It’s a 2005, so it’s already middle-aged as bikes go, but it is in great shape and is a world apart from my 1989 Terry Symmetry, which was decidedly elderly and decrepit. The Terry was my first step up from the world of chain-store bikes and it has stood me pretty well. But it has a steel frame (which is dinged and a bit bent) and I realized a few hundred miles in that it was probably a size too small for me. I was still happy with it for a really long time, but in the last couple of years I just haven’t been able to keep the necessary parts moving well. It has reached the point where it needs the whole drivetrain replaced. Last winter I realized, while browsing around eBay looking for good deals on parts, that the parts were going to cost a couple of hundred bucks at the least, and in the end I’d still have a bent bike that didn’t fit me well.

Unlike our home up the valley here, Nelson has a couple of pretty awesome rolling routes for road-biking. I was enjoying biking along the North Shore and down on towards Castlegar, except for the inevitable back pain from being squeezed up over a short little top tube and the grinding resistance of an aging bottom-bracket.

So I started scouring PinkBike for small used road bikes. There was nothing suitable in my size on the used market for under $1000 in the Kootenays. I hoped I’d find something in the Vancouver area when we visited Noah in March, but no, not then, nor when I drove out again at the end of April to pick him up. I looked in the Okanagan, knowing I was picking Erin up there in early May, but alas that came up empty too.

But then I found the right bike at the right price in Calgary, and because I knew I’d be taking Erin to Alberta for a rehearsal with her pianist in late May, I begged the seller to hang onto it for me. I did a kind of stupid thing and sent her a deposit, sight-unseen, and not knowing her as anything other than a username on a website. But I got a good vibe from her, did a little bit of sleuthing (or creeping, depending on how you look at it) and decided she was a good person I could trust. I had a good feeling about the whole thing.

I thought it was the right bike. I had been vacillating back and forth between a road bike and a triathlon bike. (What’s the difference? Road bikes are like the traditional “ten-speed” bikes that started being mass-produced the 1970’s with the curved drop-handlebars and gently angled frames. Though of course there are much smoother, lighter, better-engineered versions available now than a generation ago. Tri-bikes on the other hand look similar to the uninitiated, but the downward-pointing tubes of the frame are closer to vertical, and they have those dorky aerodynamic handlebars that are made for kind of lying your upper body down on your bike, resting on your forearms with your hands out front like they’re the prow of a two-wheeled ship. Triathlon bikes are generally considered to compromise comfort for decreased wind resistance, and to “save the glutes for running” in that the more vertical push by the legs favours the use of the quadriceps. ) 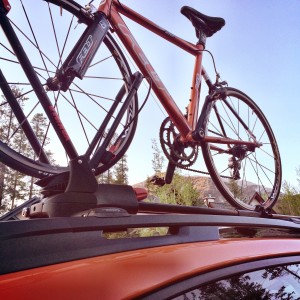 I had more or less decided that it was safest to stick with road-bike geometry because that was what I knew. But The Bike, the one that was the right size and the right price and that was being sold by the woman who I thought was lovely and honest, it was a triathlon bike. My tri-bike experience was limited to a 60-second test-ride of a similar-but-overpriced bike a few weeks earlier. I liked the aero-bar posture in that moment, but I also knew that most people find road bikes more comfortable.

The price for the new bike was only double what fixing my old bike would cost. It was almost 2 sizes bigger, yet it weighed less. And it was orange! It would (sorta) match my car! I had a really good feeling about it. So yup, even though it’s a triathlon bike, with all the pretentiousness, misplaced ambition and/or dorkiness that implies, I bought it.

I took it for a first ride in Canmore out the Legacy Trail towards Banff. I felt like I was flying. Such fun!

I should confess that I had driven alongside the Legacy Trail many times and had always scoffed: “Is that what Albertans think a trail in a National Park should be? A flat paved strip that runs beside a major highway? How lame!” But now I get it: it’s not that kind of trail, it’s a gently rolling highway-for-bikes and other self-powered wheely things, and it connects Canmore and Banff along the only corridor that doesn’t have mountains in the way. It’s smooth and fast for cycling and there’s no motorized traffic. It’s not a lame hiking trail, it’s a road for road-biking, one that doesn’t have cars and has lovely views of the Rockies. Now that I’ve mentally recategorized the Legacy Trail as a cycle path, I get it. It’s awesome.

So I flew along the Legacy. So sweet! I powered up gradual grades, never needing the low gears. I averaged well over 30 km/h without even pushing myself.

And then I came home and remembered that I live on a mountain. If I was going to ride around my primary home, I was going to have to cope with 10% grades. The 30-metre elevation gain over the entire 28 kilometres of the Legacy Trail? I get that in my 2k “warm-up” here! My first ride up the highway was not an experience with flying. I made it up, but it wasn’t pretty. My old Terry had what is called a “granny gear,” a third, smaller chain-ring that gives a range of extra-low gearing. I’m a stamina-not-strength girl; give me a low enough gear and I can spin all day, crawling up steep slopes like a caterpillar, but eventually getting there. On the other hand, ask me to summit Highway 31A in 1st-gear-is-the-new-7th and I grunt and sweat and want to throw up and the next day my quads begin 36 hours of whinging about what I’ve put them through …. ask me how I know.

The easy solution would be to swap out sprockets, or down-size my smaller chainring. Even before I bought the bike that’s what I assumed I’d end up doing. But today I rode again. I took it easier on the easy parts, saving myself for the nasty bits. My legs had recovered, and hey, I did better! I made it up beaver-pond rise without a break, and not once did I feel like throwing up. In fact I had a grand time. Also: no back pain! Tired shoulders after a while, but I can tell I’m still a bit too tight and hunched in the upper back in the new low position. But no back pain at all. Sweet!