Another Suzuki Valhalla Institute has come and gone in a whirlwind. It was odd not having Erin around being part of it. And several other members of her cohort of advanced students had also moved on, so the next bunch of kids became more senior and thrived in their new roles. 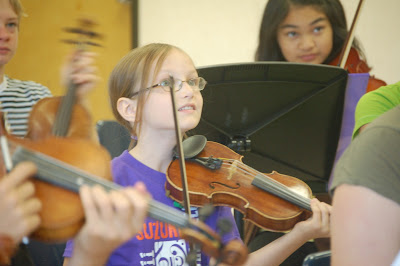 Fiona moved up to the advanced orchestra and the advanced group class this year. She did some good preparatory work for the orchestra and coped well with the demanding repertoire. Group class ended up focusing a lot on advanced bowing techniques like spiccato, sautillé and ricochet. She had just moved up to a nice hand-me-down quarter-sized violin about three weeks before and I hadn’t really appreciated how cheap the bow was until I tried to use it myself to figure out how to advise her about the bowing exercises. It was a fibreglass clunker completely incapable of bouncing. Fortunately the luthier in residence had a much better bow in stock. A couple of hundred dollars later Fiona was doing and pretty passable quadruple ricochet! 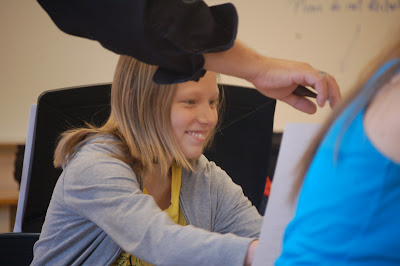 Sophie played second violin opposite Noah in a two-viola quintet (the Mozart g minor), as part of the Advanced Chamber Music program. She was socially very much like a teenager amongst that group of awesome young musicians, fitting in beautifully and enjoying the mileu. She was in the advanced orchestra and group class and had a very productive master class with a teacher she got along well with. She performed the Monti Csardas on recital and did a great job. She loved being out and about during the days and the evenings, having a full social life and a busy musical schedule. 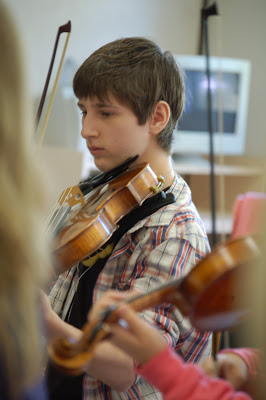 Noah was also in the thick of things socially as part of the Advanced Chamber Music program and although he would have loved to have Erin around to be part of the whole thing, in some ways it was fabulous for him to be able to shine a little brighter as a musician and as a bright, funny, compassionate and increasingly adult-like young person. He is playing just beautifully and actually worked hard on his solo viola repertoire during the week, with motivation left over to carry him forward. He has really struggled with motivation for the past couple of years, so this was nice to see. He had a wonderful affinity for his master class teacher and made some really great strides with his Schubert Arpeggione Sonata.
SVI 2011