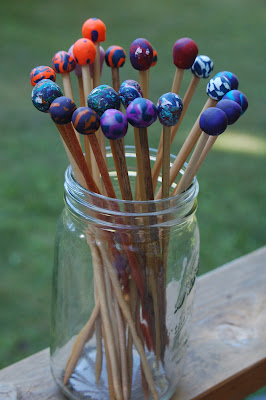 We decided that the “quiet activity room” of arts & crafts at next week’s Suzuki Valhalla Institute would be enriched by some knitting needles and yarn and an invitation to contribute to the Knit-a-Squillion challenge. So we set about making a bunch of knitting needles for kids and parents to make use of, according to the directions in Melanie Falick’s wonderful “Kids Knitting” book.

At the hardware store we purchased a couple of dozen 48″ lengths of 3/16″ hardwood doweling. We cut them into 9.5″ lengths and used a pencil sharpener to make points on one end. Then we sanded them to smooth the shafts and shape and smooth the points to perfection.

Next we set about making knobs for the end out of polymer clay. Some of our polymer clay was left over from 1990, so it had a tendency to adopt the consistency of toast crumbs and needed a lot of kneading! Patience eventually resulted in a couple of dozen pairs of funky and quite fetching knobs which we then poked onto dowels and baked to cure.

After the knobs were hard, we removed the dowels from them and did the final finishing of the needles. We used aniline dyes on a few pairs of but left most of them natural. We oiled the shafts with walnut oil, and repeated this a couple of times. The oil will cure over the next few days. We filled the hole in each knob half full of PVA craft glue, inserted the end of a needle and left them to dry.

They look really enticing. They’re not as teflon-smooth as $10 pairs of high-end bamboo needles, and the knobs are a little heavier than I’d prefer, but they’ll certainly do the trick for basic projects.