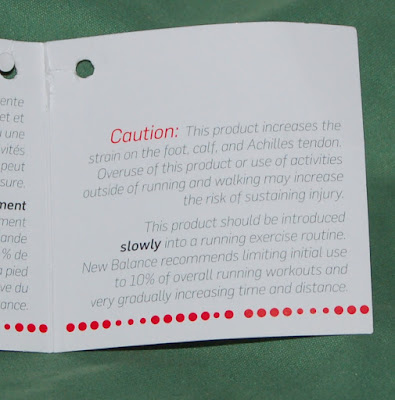 My New Balance Minimus shoes may not look radical, but they come with a radical warning.  I just discovered this on the tag I eagerly tore off them when I picked them up.

But for the better part of a year have done a substantial part of my running barefoot or in other types of minimalist footwear. I’ve been through the phase of owly complaints from my calves and Achilles tendons and have come out the other end. So I figure my exemption from the manufacturer’s suggested limits is well-earned.

I’ve done about 15 km in them so far and really like them. They have lots of room in the toe box, so much so that it almost feels like there’s no shoe in the forefoot at all. Cinching the laces up gives a well-fitted feeling in the mid- and rearfoot while not reducing freedom in the forefoot. I have not had any trouble with blisters, despite the lack of a cushioned heel counter. They feel light and secure. My ITBS issues have not been a problem at all in these. And my Achilles troubles, which seemed to finally resolve themselves for good during January and February, have not recurred. Mechanically they feel very close to barefoot.

“Ground feel” is not as good as in my very thin huaraches, nor quite as good as in my VFFs, but is considerably better than in the New Balance WT100’s (the minimalist shoes Erin has taken over as her own). And of course ground feel is light years better than in traditional running shoes. Step on a sharp piece of gravel and you feel it: it doesn’t hurt, but you’re aware that it is there. This protection has advantages and disadvantages. I can run comfortably over sharp rough terrain that my feet wouldn’t otherwise tolerate, but on the other hand this protection makes it possible to “pound the pavement” in a manner that puts more than natural amounts of stress on the joints, the kind of bad biomechanical form that traditional running shoes do so much to encourage. Not to the same degree, of course, but I can still tell that it’s possible to be lazier with my form in the Minimuses than barefoot of in huaraches.

The sole has round lugs and the rubber is fairly sticky. I expect that it won’t have quite the longevity scuffing along on pavement that a harder rubber would have, but it seems like it will be ideal for trails. On snow its grip is so-so: better by far than Vibram Five Fingers, bare feet or huaraches, but not as good as the deep angular tread on a traditional trail-running shoe.

Altogether I’m very happy with these. Now, if only the snow would melt. We still have a couple of feet on the ground. The community kids’ soccer program is slated to start in less than a week. Hmmm.