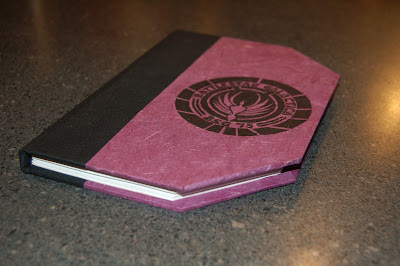 My little one has turned 8. What an amazing person she is. So affable, curious, capable, thoughtful, resilient, incisive. Easy. And bright. Wow.

I made her a couple of gifts. One was a hardcover journal modelled after the books in her favourite TV series ever, the 21st-century re-imagining of Battlestar Galactica. That was fun to make. I hadn’t made a book with a case binding in years and I had to look up a few of the details. I was pleased with how it turned out. Erin’s reaction was priceless. (She’s the other huge BSG fan in the family.) She saw the book, her eyes lit up with recognition, she blurted out “Hey, that’s a … Why didn’t I … hmm…” and then drifted off into good-humoured but envious silence. Yup, kiddo, this one’s for Fiona. You got your mom-made BSG military fatigue shirt set for your birthday a couple of weeks ago, don’t complain. She didn’t. She laughed as hard as the rest of us at her reaction.

What Fiona loved best was the stars. She sleeps in the lower berth of a bunk bed in the room she and Sophie share. She stares up at the slats beneath Sophie’s mattress and told me a while ago that she wished she had a picture of the sky to put up there. I decided it should be a night sky. I bought a huge black sheet of foam core board and got out at star chart and a bottle of glow-in-the-dark paint. (Every creative family should have a bottle of phosphorescent paint. It’s what we used to make Fiona’s butterfly costume glow in the dark last Hallowe’en, and it’s been fun in a few other applications too over the years. I don’t know where you buy it; our bottle is so old I’ve forgotten where we got it.) 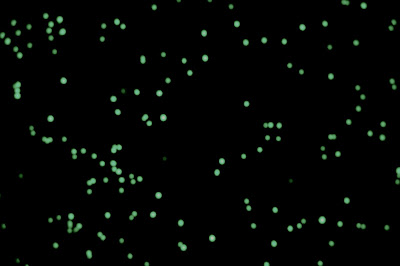 I put the stars on as dots of glow-in-the-dark paint. I didn’t go for mathematical accuracy. I tried to reproduce most of the major northern hemisphere constellations in recognizable shapes and in the correct general orientation, but scale isn’t accurate, nor are their relative positions totally proper. Fiona likes looking for constellations, so I labelled the constellations using a silver-grey pencil crayon. With a flashlight pointed at the board you can spotlight a group of stars and see the configuration and name of their constellation. With the flashlight off you see just the “stars” and you can practice picking out the constellations. The photo doesn’t do it justice: it only shows half the area and it’s blurry due to the 30-second time-exposure. It’s quite lovely to look at. (I can say that because it’s not my design. I just copied what’s writ across the heavens.)

It was a successful birthday. She was so excited all morning that she had to resort to jumping jacks and practicing her violin to contain some of the energy she had. She had chosen to have an afternoon tea party at her grandma’s house as part of the celebration. This entailed a lot of snow-blowing and shovelling to release the van from its tomb of snow. It has been impossible to get up and down our laneway for more than a week, so the poor van has been parked up at the highway, not used much and bombarded with the sprayed snow of the plows and with the relentlessly falling-from-the-sky stuff too. There was a good 40 cm of depth covering it, and more than that on the ground around it. After we’d got rid of all that, it was left sitting on a sheet of ice and a bit of icy snow and it took a fair bit of sanding, digging and pushing (by the three older kids) to get it unstuck and able to move forward. Finally we made it to grandma’s. We drank tea, ate pumpkin gingersnap cheesecake (adorned by marzipan pumpkins made by Sophie and Fiona) and she opened gifts. It was nice to get out. We’ve been at home a lot since the driveway got un-navigable. We then returned home for a dinner of Shepherd’s Pie — one pan with meat for the three omivores and one vegetarian version for the three vegetarians. And now it’s time for bed, and a view of bed stars.