Erin emerged from the basement yesterday and asked “When can we go somewhere?”

It takes a lot to get that introvert to the point where she’s wishing for a social outing of some sort. It’s been that kind of holiday break, though. We all needed a dose of home-bodying. We had a lot of travel and a lot of performances last fall. After a full week of little other than being home together I guess we’re feeling recharged and ready for something more. 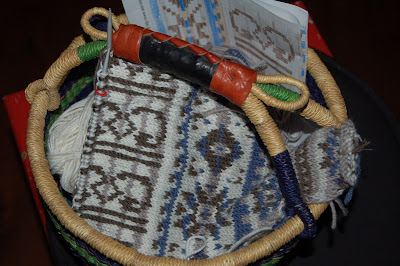 The three older kids were all sick in succession, which was a bit of a bummer. But still, it was a nice time. We skated on the rink. We played board games. We worked on jigsaw puzzles. We talked and laughed and drank egg nog and ate treats and stayed up late and read stories. I started knitting again. I’m currently mid-way through my Alto Clef Chullo, a warm hat for a violist. Chuck was on call most of the holidays, but things were relatively quiet.

Erin is practicing up a storm for her National Youth Orchestra audition which we just found out is next weekend. (We hadn’t heard anything, so had assumed it would be later in the month. Luckily we were planning to travel to Calgary next weekend anyway.) She’s been practicing hard for a couple of weeks, which means she’ll be pretty well prepared I think. Still, she hasn’t managed to have a lesson on any of the audition repertoire. Too bad, since 80% of it is orchestral excerpts, which she’s never had to prepare before. She’s also madly trying to complete her Canadian History course, doing two assignments a day. The course is very heavy on assignments: about 65 in total. She’s now more than three quarters done. She dislikes the course intensely for all its touchy-feely “creativity-nurturing” assignments. She’s of the “where’s the beef?” persuasion when it comes to required coursework. She’s also taken on the piano accompanying gig for the local Suzuki recital in February, so she’s working on some of that music. She spends her free time dreaming of living in Montreal on her own. 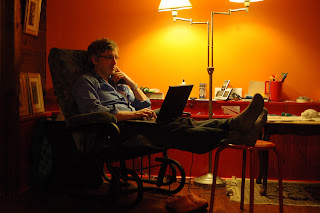 Noah has been doing some awesome virtual robotics stuff, scripting something he’s called “Followbot v3.0” in Garry’sMod / WireMod, building scripts and virtual logic gates in a virtual physics environment that allows him to test everything out. Even better, he’s been writing about his process, explaining everything in detail in a blog he keeps in order to report to our DL teacher. He’s an amazing technical writer, but hasn’t had much interest in writing this year. To have him write in great detail in a clear and incisive way about his projects takes a lot of heat off me and his liaison teacher in terms of providing proof to the school system that he is in fact highly literate. It also functions as a de facto major project for the Grade 10 and 11 InfoTech courses the school hopes to give him credit for. And he got totally stoked by some new viola repertoire he was given just before Christmas: the magnificent Schubert Arpeggione sonata in particular. He’s taught himself the first two pages and is now chomping at the bit waiting to receive the last two in the mail from his teacher with her fingerings and bowings.

Sophie has been taken under her Noah’s wing in the programming and gaming department for better or for worse. She’s learning some basics in WireMod and playing “mature” games on-line, or via LAN with Noah on the other computer. She’s also been doing some awesome artwork on RateMyDrawing.com — using a laptop touchpad, for heaven’s sake. She recently acquired a digital pen tablet, so that should simplify things. She sewed some really brilliant gifts up for Christmas, figuring out how to do all sorts of nifty stuff with the sewing machine in secret and is finishing up some fair-isle knitting for a little cushion she’s making. She seems emotionally on a much more even keel and is happy. For a 12-year-old girl anything else is a bonus.

Fiona is as always an energetic and passionate renaissance kid, interested in anything and everything, game for whatever she’s presented with. Her ice-skating is coming along wonderfully, she can make scrambled eggs, and soup and cookies from scratch, she’s puttering her way through her current math workbook, reading chemistry and biology textbooks for fun, mastering “Treasures of Montezuma” on the iPad, reading for hours a day, enjoying blogging and photography and knitting, working hard at the tail end of Suzuki violin book 5, and making pithy little observations in the course of daily life that make me laugh, or my jaw drop, or both.

And now I’ve got a few little odds and ends to do on the computer (music arranging and meeting minutes to type), and then it’s back into the fray after one more cozy evening knitting in front of the fire.

One thought on “Goodbye holidays”