I slept in this morning! We were up late last night, and today had absolutely nothing scheduled.

Last night was the community choir concert. Sophie is doing her first season with the ensemble. Unfortunately she was put in the middle riser so that her sense of pitch could help those in the first row. Which probably benefitted the auditory appeal of the concert, but meant that she alone amongst the choir was totally hidden. I could occasionally catch a glimpse of her shoulder but that was about all.

Erin accompanied. It’s a paid gig for her — a not-insubstantial sum for learning a dozen and a half pieces in time for the first rehearsal and then attending every rehearsal as the choir gradually learns its parts and polishes things up. She did fabulously! She’s exquisitely sensitive, manages a kajillion page-turns totally on her own, plays musically and knows exactly when to take the bull by the horns and railroad the choir into melodic and rhythmic cohesion.

It was the choir’s 25th Annual Christmas Concert. My dad sang with them for a few years before his death in 2003. Then Erin sang with it for two years, and Noah for one, before they both defected to Corazón. The choir director throughout those 25 years has been the wonderful woman who took Erin to S.E. Asia two years ago. So it’s great that Sophie is now taking her turn with them, and that Erin has come back to support it as the accompanist. The choir  is a good one for a community so small and it has a lot of heart, and personality. It even inspired a funny and touching chapter in Caroline Woodward’s latest novel. It was a lovely concert, and there was a fabulous community potluck dinner / party in the hall afterwards, with kids running around, people with canes and wheelchairs, old folk, young parents, lots of hugging and singing of carols around the piano.

And now there’s almost nothing on the schedule for the next week. Chuck works, Erin has one shift at the café. I teach a few violin lessons and work a morning at the clinic. But no group classes, choir rehearsals, Summit String rehearsals, no trips out of town for lessons or orchestras, no violin lesson for my kids, no driving Erin to and from school.

Today I did some more work rehabilitating the rink from last week’s thaw. There’s a nasty four inches of crusty snow on top of an inch and a half of frozen slushy stuff that adhered to the rink surface. And the dog walked through it at some critical juncture, making nasty bumps and potholes. It’s taken me hours to get it shovelled off, and it will require a few more floods to be back to its smooth state of glory from earlier in the month. Oh well, it will be worth it. 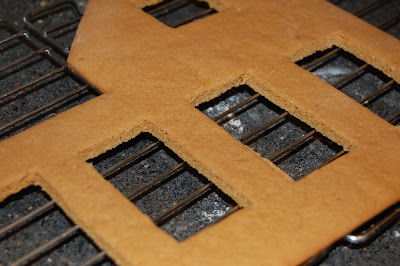 And we started in on the gingerbread house. We used to do some sort of gingerbread construction every year, but we let this habit lapse and I hadn’t realized how long it had been: Fiona has no memory of ever decorating a gingerbread house! I know we’ve done this since she was born, but I guess the last time she was too young to really appreciate it. So it was high time. Sophie and Fiona were, as usual, workhorses in the kitchen, managing huge amounts of the work themselves.

Then to top it off, Noah cooked pasta dinner for us all.

One thought on “Holidays”