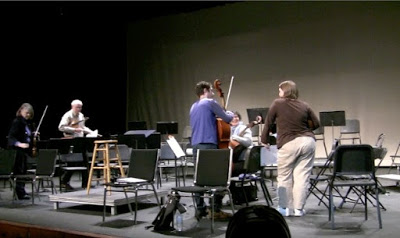 What a difference for the kids, Erin especially. It has been years since she hasn’t been if not the most advanced violinist in whatever orchestra she’s playing in, at least one of the most advanced handful, patiently waiting for others to figure out where the E-flats and shifts and syncopations are. The last time I remember her being really challenged, in the mid-range or bottom half of an orchestra, was in 2003, when she was 9, at a summer Suzuki institute.

We drove for 5 hours and arrived with 40 minutes to spare before the first rehearsal, checked into our motel and made it to the theatre in time for a leisurely tune-up. We rehearsed that afternoon and evening, and again the next afternoon. Almost 8 hours of rehearsing packed into less than 24 hours, and then that was all. After that there were just the performances: one Saturday night and one Sunday afternoon.

Erin sat back of the 1st violins, I was sitting with my old quartet-mate at the front of the seconds, and Noah sat at the back of the violas. None of us had, er, gone overboard with preparing for this gig. I realized I hadn’t performed on violin in almost ten years, much preferring viola, but the viola section was well-stocked especially with Noah there and they were in need of violins. Erin hadn’t even done more than visually look over her parts, but found her groove and really warmed to the challenge of essentially sight-reading two hours of music. She did fabulously. Noah took a couple of rehearsals to get past his deer-in-the-headlights reaction to having to adjust, remember, mark in and learn scores of bowings on the fly. His note-reading is good these days but bowings? Not so much. But his confidence grew so that he was feeling quite accomplished by the time the performances took place.

We played part of a Mozart piano concerto, a Purcell Sinfonia, a Handel Aria with oboe solo and the better part of Handel’s Messiah with a reasonably competent community choir. Pretty lightweight accessible stuff, nothing too challenging, which was a nice first gig with this group. The other orchestral musicians and the vocal soloists were mostly second- and third-string professionals or former professionals. Nice bunch of people, both on the performing and the administration side of things. And a very novel, very exciting and grown-up kind of experience for my kids.

Even though we already drive many more hours a month than we would like, we all felt that this experience was worth the ten extra hours of travel. Not only that, but unlike all the other musical activities we do this one was a black-ink fiscal proposition, rather than a red-ink one. And we found a very nifty café at which to pass the three hours between motel check-out and the last performance. We’re hoping to do a couple of other weekends with the orchestra this year.

Symphony of the Kootenays

5 thoughts on “Symphony of the Kootenays”