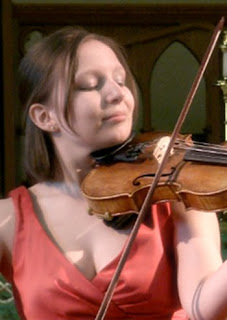 It’s been more than a week since Erin played her big local recital. It went very well. She was amazing.

The community hall was full: maybe 150 people? Not bad for a community of under a thousand! The concert was a fund-raiser for the Valhalla Fine Arts Society, the organization which among other things backs the Suzuki Valhalla Institute, so near and dear to Erin’s heart. I still haven’t heard back about the “take” in donations at the door but it looked very generous.

She played beautifully. Unbeknownst to either of us until the recital was underway, the organizer had done away with the intermission. We had asked that they do the three minutes of announcements about the Society between the Bach and the Saint-Saens, to give Erin a few moments to regroup after all the austere intensity playing unaccompanied for almost half an hour straight. I guess the organizer misinterpreted this as being instead of the intermission which was supposed to occur between the Saint-Saens and the Mendelssohn. The absence of the intermission was announced when Erin was about to walk back out for the Saint-Saens, too late to do anything about. So she ended up playing all this incredibly challenging music for about 78 minutes straight, with only a 3-minute break after the Bach.

The audience was incredibly enthusiastic and appreciative. Erin is very much a darling of the local arts and music scene and has so many amazing fans. In the audience were people who have sung in the local choir with her in the past or who sing in the choir now and enjoy her accompanying, folk who have been part of the Suzuki community over the years, people who have heard her play in the past at many recitals, orchestra concerts and summer chamber music performances, the teachers and the principal of the local school, artists, retirees and electricians who frequent the café where she works part-time, high school students, current and past members of the community orchestra, friends of the family … lots of people. Many of them remembered her from her first years playing on a sixteenth or tenth-sized violin. Very few of them had heard her in violin solo performance within the past couple of years, so they were blown away by her technical and musical progress.

In many ways it had the feel of a graduation event. In our small town, where high school graduation classes range in size from four to a dozen or so at most, every graduate is celebrated by the community. Even at the big combined ceremony there are speeches and reminiscences and childhood photos shared for each student. Grad here is a way for the community to mark a rite of passage into adulthood, to perhaps say goodbye for now to the students, to remember the role each of them played in the community as they grew up, and the role the community played in shaping each of them as they grew up. Erin’s recital had that kind of feel for me.

Of course she’s not graduating. She’s not moving on. She’s not leaving. Not yet. Which begs the question: what next? Montreal beckons but even if that happens a year early it’s still a long way off. The time since the recital has felt pretty aimless and empty. I guess we knew it would feel like this. Some other stuff is on the horizon, but it does all feel like a bit of a let-down. Not surprisingly. The recital was a big high after months of hard work.

You can reconstruct the recital for yourself via YouTube. I didn’t record the Bach again, so for that you’re stuck with the lovely exerpts from the Kelowna recital. But the rest is here:

3 thoughts on “The big recital”