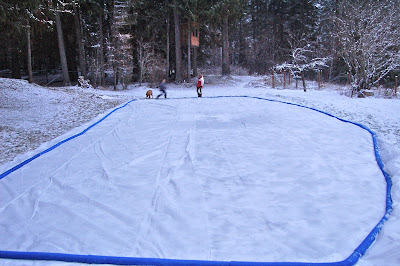 A week ago I put the snow tires on only because I was driving a bunch of kids up and over the Monashee Pass, where I thought there might be snow. It’s been a warm wet fall and if we hadn’t been going over the pass I would have left the all-season tires on for another while yet: snow did not seem imminent.

But it finally did snow a couple of days ago, just a dusting, really. A little more up at our house, since we’re 250 metres above the village. But nothing to get too excited about. We figured it was the normal sputtering start to wintry weather: a few days of flakes, then a couple of weeks of mud and more rain, then some more flakes and back and forth for a while. Typically by mid-December the snow settles on the ground for good. Sometimes a bit earlier, sometimes a bit later.

But Sophie alerted me to the 14-day extended weather forecast this morning:

So we put the trampoline away today and got out the rink liner. We’ve never started on a rink until late December with skating following sometime in January, but this spate of arctic weather seems just too good to miss. We have a new tarp, purchased last fall but never used due to the spuriously warm winter we got in 2009-10. It’s more than large enough, so we set up the contours of the rink to take advantage of the most level part of the yard. We’ll see if we can actually manage a few days of skating in November.

The down side: I’m not at all sure about running barefoot at minus 22!

Seasons turning on a dime

One thought on “Seasons turning on a dime”