The speed interval training I’m doing reminds me of the Couch-to-5k program I used six years ago to get started running. Back then it was “jog a short time, then walk a short time” which progressed gradually to “jog a longer time, then walk a short time.” In other words, the easy slow intervals became gradually less frequent over the course of training. In the case of the C25k program, they eventually disappeared altogether, so that you were able to run the entire 5k.

This time around the slow intervals are a jog, and the fast intervals are run at a pace just barely below the anaerobic threshold. For me right now that’s about 4:55 per kilometre (7:55 per mile, 12.2 km/h). The total distance run at this faster speed is about 5 km every week, but the first time that was split up into 12 separate short sections. Week by week the fast chunks got larger. Because I love graphs, here’s what the progression looked like: 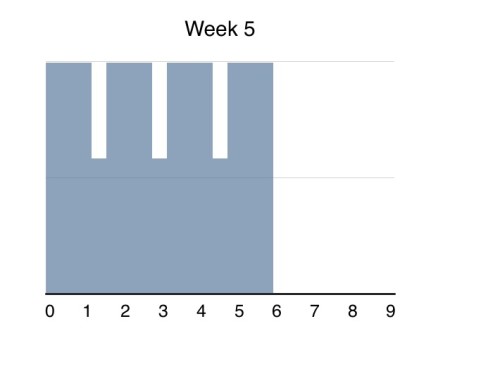 Because the fast intervals are done so close to threshold, one isn’t aiming to get rid of the recovery intervals entirely. That would be a good approach if training for a 5k race, but for marathon training the idea here is simply to nudge that threshold upwards a tiny bit while improving the form and efficiency of the running muscles.

If you had told me after Speed Week 1 that I’d soon be able to run 1.2 km (rather than a measly 400 metres) at that fast pace I would have been very skeptical. As I recall I tried to explain that to myself and I was, in fact, deeply skeptical. I am impressed that the training seems to be working: I was able to complete Speed Week 5, and it actually felt easier than Week 1.

The next phase involves weekly strength workouts, which are longer and still faster than marathon pace, but only by a bit. These should be easier for me.

One thought on “Marathon Training: Week 10”