SVI has come and gone for another year. Registration filled extremely early this year (third week of March) and that allowed me to get a jump on the scheduling. We had most of the basics fleshed out by mid-April, which took some of the pressure off me in May-June, when things normally get fairly frantic due to the overlay of other things (tax deadlines, end-of-year dance performances, kids graduating from high school, etc.). This year I was able to shift my focus during that time, setting SVI on the back burner. Of course, the usual late cancellations upended the schedule more than once and left me frantically trying to re-do things well into July, but at least by then I’d had a breather! 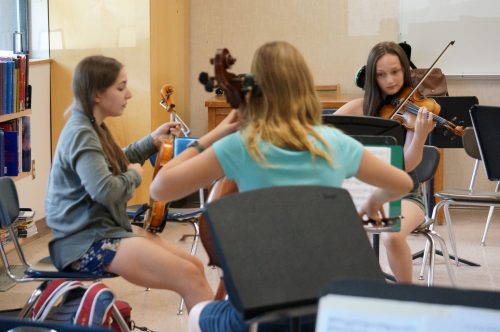 Fiona was one of the more senior students in the Advanced Chamber Music program this year, and Erin was hired to help with accompanying and chamber music coaching. That led to this situation: one sister coaching another sister’s quartet. Apparently it went well.

The ACM program got much bigger this year. We had a crop of kids applying for the first time, many of whom had been part of SVI for years and aspiring to the chamber music experience. We ended up with seven ensembles (one duet, five quartets and a quintet). The groups were all remarkably well-matched and the repertoire seemed to hit the sweet spot for them in almost all cases. 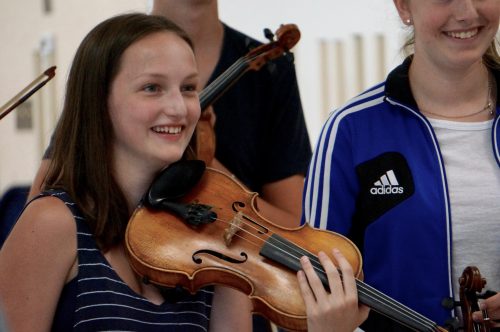 Fiona had a lot of fun socially as well as musically. Like usual she enjoyed reconnecting with old friends. She stays in touch with many of them by way of social media throughout the year, and this option has been invaluable to a homeschooler who has few peers (and even fewer musical peers) 50 weeks of the year. They managed to pick right up where they’d left off musically and socially.

On average the institute has been getting more advanced over the last few years. That’s probably a function of the early fill date. Returning families know how early they need to register to ensure themselves of a spot, and they tend to get the jump on enrolment and fill the program before new students think about making plans for the summer. Next year we’ll set aside a portion of the slots for Book 1 and 2 students, since we want to keep a nice range of student levels for the good of the program.

Here is the advanced violin group performing with Fiona on the front left. We had fun assigning ensemble pieces that stretched their ears and technique in new directions by exposing them to new styles.