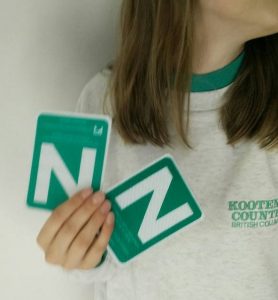 Sophie did it, she powered through the “L” (learner’s) phase of getting a driver’s license, and got to the “N” (new driver) stage. As I wrote a year and a half ago, things are not exactly set up well, nor is motivation terribly high, for my kids to become licensed drivers. Neither Noah nor Erin have bothered thus far. But Sophie figured she might as well take the leap and do her road test before moving away to university. Granted, she will not have access to a car, and will have free public transit, for the four years of her post-secondary degree, but she knew that the road test would not likely get any easier, and would only get more costly to practice for, once she’d moved far from home.

It turned out that the only appointment she could get for the road test in August was during the week Chuck and I were away in Ontario (and could neither drive her to the testing location, nor put the car at her disposal for the test itself). So she had to arrange with a nearby driving school to hire one of their cars, and pay an instructor to give her a pre-test lesson to familiarize her with the car and give her a quick professional brush-up. She did that. The car was great. The instructor was great. The road test went well, and she was awarded the Green N.

For at least the next two years, until she takes and passes the next level of road test, she’ll need to put a Green N on any vehicle she is driving. She’ll need to keep a clean driving record, have zero alcohol in her system when driving, not drive between 2 a.m. and 5 a.m. and never carry more than one passenger. Since she doesn’t have a car to drive those restrictions aren’t a big deal.

In the week before she left for university, she did at least get the chance to drive on her own a couple of times.