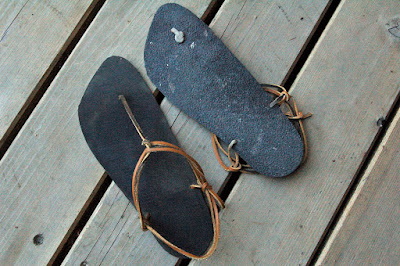 Here’s another chapter in my minimalist footwear adventure story. I made these sandals in the traditional huarache style out of a bit of 4mm rubber outsole material purchased from a cobbler in the area. I traced my feet, cut the sole with scissors, punched three holes and added a leather boot lace. The materials cost about $15. I may have to replace the laces once a year (for $3), but the soles look like they’ll last ages.

To lace them, I followed the directions at Invisible Shoe. The knot under the base of the toe has compressed to negligible thickness and I don’t feel it at all. I find these really comfortable. I was never one to like flip-flops; the prong between my toes felt intrusive and tended to give me blisters. But I find the thin leather lace unnoticeable after the first minute or two of wearing these.

Each sandal weighs less than 80 gm (3oz.), which is less than a third of what even the lightest running shoe weighs. So they’re very light, but the sole material seems to be very durable — it’s good Vibram stuff, sturdier than the softer rubber typical of running shoe soles. 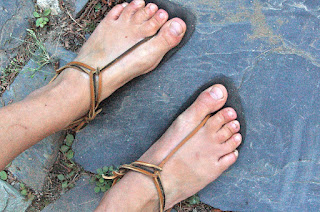 I’ve been wearing these around for a few weeks, but only just started running in them. Last night I did part of my speedwork in them. On fast downhills the lace rubs a bit between my toes. I think that if I’d gone out and done 12 miles of steep trails on my first huarache run I might have got blisters there. But with a gradual approach I’m sure my feet will get used to that. No blisters last night, anyway!

They feel like almost nothing. I feel bits of gravel through the soles, so that I’m aware they’re there, but there’s no discomfort. They’re so open and airy that perspiration dries as quickly as it’s produced. So I don’t feel the need for a suede or foam footbed on top of the sole material.

One thing I didn’t like was the sound. The thin soles are floppy enough that no matter how lightly I place my feet, when I’m running quickly the rubber tends to slap the asphalt. One of the things I love about barefoot running is its silence. But last week my barefoot stealth style allowed me to inadvertently startle both myself and a young bear by getting much closer than I normally am comfortable with before either of us noticed. So a little “slap, slap, slap” probably isn’t a bad thing in the big picture. Also, once in a long while I would almost catch the front of the sandal and fold it under. It might be that the hole for the toe-lace isn’t quite far enough forward, or maybe the 6 mm thickness would have been better?

I did half yesterday’s speedwork in bare feet and half in my huaraches. I definitely prefer the feel of barefoot, but I can see the huaraches being useful for gravelly surfaces where barefooting isn’t yet comfortable for my still-somewhat-tender feet.