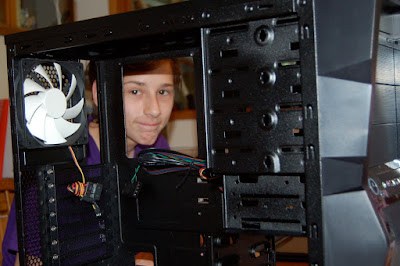 Noah has always been the heaviest computer user amongst or kids. He’s a self-made geek who has become a whiz at tinkering with software. Recently he’s been straying into the realm of hardware, trouble-shooting connections and adding secondary drives.

But all the tweaking and upgrading of a five-year-old heavily-used computer hasn’t been quite enough. The games the kids like to play demand high-end processing, lots of hard drive space and excellent graphics capabilities. The old motherboard and operating system weren’t really up to the task, the hard drive had tanked, the computer was officially non-functional, and the patchwork approach of repairing and upgrading no longer seemed like it was the most sensible route. It was time for a new machine.

Noah spent a lot of time researching products, compatibility and pricing. Because some components could be salvaged from the old computer, he figured it would be most economical (and most fun) to build a machine himself. He managed to cobble together the components for a pretty awesome gaming machine for under a thousand bucks Canadian. And this morning the bits arrived. He and Chuck set to work putting it together. As I type he has the assembled tower whirring away installing Windows 7, flashing all its funky multi-coloured LEDs.

4 thoughts on “Building a gaming machine”