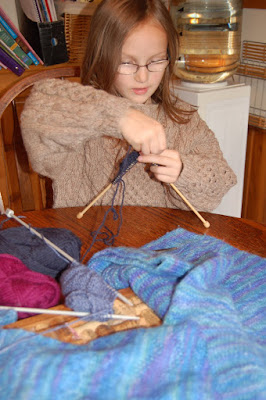 It’s fall. Every fall for the past few years I am struck by the urge to get out yarn and needles and start creating things. The kids have all got sweaters and hats, countless Christmas gifts — socks, hats, mittens, scarves — have been knitted for various people. And it starts every fall, sometime in late September or October. I think it has something to do with the wood stove. Its cozy glow invites knitting.

And now it seems that Fiona and Sophie share my annual awakening of knitting passion. Sophie even has her own Ravelry account which she diligently updates. I suspect Fiona will want her own before too long. I’m working on a cardigan. Sophie is finishing up the back of a felted cushion for which she did the fair-isle top last year. She’s also gone into production with korknissen. She can finish a hat and sweater, and do the gluing to the cork in the space of about 20 minutes. Yesterday she made four. Her ambition is to create enough of the cute little guys that she can assemble a battalion for a surrealistically sinister effect. Her demented sense of humour invades even this.

Fiona has begun work on some leg warmers which will match some of her Lands’ End outfits. Yesterday she successfully reviewed the knit stitch, then learned the purl stitch and did the two inches of 2×2 ribbing at the top of her first leg-warmer. She was thrilled with the success. 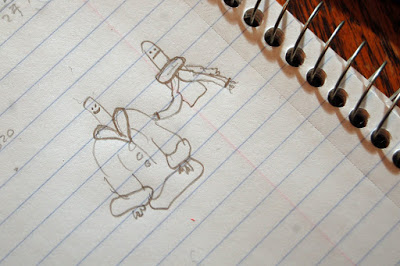 This sketch shows Ms. Knit with her furry-collared coat and Mr. Purl wearing his scarf. It was my attempt to show Fiona the difference between the appearance of a knit and purl stitch on the needle, so that she could more easily keep track of her ribbing. I drew the yarn pattern, then the faces got added by Sophie and we went on embellishing until we had little friendly-looking characters. It’s fun to see how much more capable the girls get in their knitting from year to year. Fiona is much faster than she was last year, when it took her the better part of a month to knit a bean bag! And she makes fewer mistakes. Even better, when she makes little mistakes, Sophie is incredibly capable at helping her fix them by un-knitting, picking up dropped stitches, undoing accidental loops and the like. So I don’t even need to be around.

We’re also busy with washing, carding and dyeing fleece. Our fleece adventures are moving slowly but relentlessly forward. Most of the immense bag of raw fleece is now fully washed. About half has been carded. Dyeing has begun. Spinning, well, we’re still thinking about that.

One thought on “Fall and fibre”