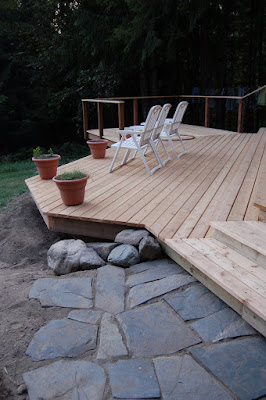 Minimalist railings. We opted to install them just in the area with the significant drop. It’s less than a metre’s drop off the area in front of the chairs. The kids have done aikido; they ought to be able to handle a fall like that. We’re thinking that hemp rope horizontals between the railing uprights might be nice. It might take a while.

The apron area at the far end is tentatively where we’ll put our deck table and chairs, if we ever purchase any. But we realized it’s also the perfect size for a string quartet to rehearse or perform. Perhaps someone makes those huge canvas and teak market umbrellas with a quartet of music stand desks attached to the upright, you think?

I’ve been busy moving rocks again. A year ago I moved them all away, now I’m moving them all back. But this time they’ll stay. Coincidentally the flagstones originally came from up Retallack way, just a couple of kilometres east of the part of the running map I showed on my last post.

What’s not shown in this photo is the lump of dirt. It’s about as tall as me and the apron of flagstones leads directly to it. It’s what was created when the machine graded the earth back in front of the house to make space for the deck. As soil goes it’s not bad — it’s just in a bad place. Gradually, shovelful by shovelful, I’m moving it into the area just in front of the deck to create a garden of shrubs, flowers and herbs. 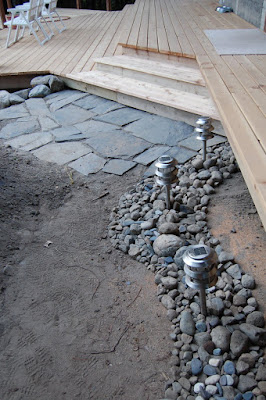 You can probably imagine that the endless shovelling and rock-hauling are not the best things for a person trying to rest her inflamed sacroiliac joint, but hey, call me stupid, I’ll answer.

The planters on the deck contain the herbs we salvaged from the herb garden that used to be where the main part of the deck is now. I made dozens of pints of mint-jalapeno and mint-rosemary jelly and still there was mint left over, much of which got mashed by the machine. I expect it will be growing up between the decking before long. It’s already begun springing anew from the lump of dirt.

This walkway (photo: right) is protected beneath the roof overhang and will therefore remain dry and clear of snow. However the drip line of the roof is directly in front of it. To prevent a muddy trench from developing, I’m creating a karenagare, a dry stream bed. It’s a good place to put all the rocks I’m pulling out of the lump of dirt, but it also looks nice I think and softens a bit of the harsh geometry of the deck lines. It’ll get bigger as we work, and it will ultimately be the place we put all the “favourite rocks” we traditionally bring home from the beaches we visit.

3 thoughts on “Around the deck”