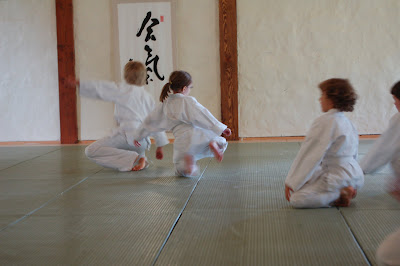 Today was the end of the aikido year and the spring gasshuku. There are three gasshukus during the year, each one a day-long intensive schedule of training, meals, working, playing and more training together. The end of the day involves testing for the next belt colour for eligible students.

In our Aikido club there are three criteria for belt testing — positive attitude, skill level and commitment (meaning 40 to 60 classes and at least two gasshukus attended since the last level was achieved). Generally speaking it’s the classes that define the rate of progress through the levels. It is expected that it will take the better part of a year to progress to the next level since there are about 80 classes available per year. We knew Sophie was close to testing again. She had got her yellow belt late last fall, but due to Calgary trips and a double-whammy of extended illnesses in the winter she missed a lot of classes. So she’ll test at summer camp for her orange belt. 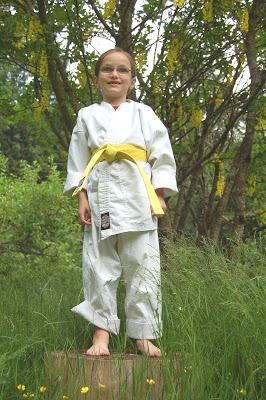 What we didn’t realize until last week was that Fiona was eligible for yellow belt testing. None of the kids in the 4- to 6-year-old class has ever had a colour belt, so we just assumed belt testing didn’t begin until a student officially joined the Children’s Class for the 7-year-olds and up. But it turns out they’ve just not had a student in the younger class in recent times who has had the skills, the required number of classes and the stamina necessary to fully participate in the gasshukus. Until Fiona.

So today was the day. It started out badly at 2:30 a.m. when she awoke feeling nauseated and with a low-grade fever. She eventually came and got me, threw up a little, felt better and then she and I spent a restless remainder of the night together cuddling and trying to get back to sleep but not managing much. She did sleep for a couple of hours around 6 a.m. and awoke feeling just fine, no fever, hungry for a bit of breakfast and, although tired, totally psyched to go to the gasshuku.

She wasn’t really herself all day. A little stuffed up. Not much appetite. Tired. But she wasn’t floridly unwell and she was determined to stick things out. And she enjoyed herself and worked very hard. And at the end of it all she was awarded her yellow belt, along with one of her good friends and a whole bunch of other aikido buddies. She was pleased enough to put her dogi on again to model her belt outside at home.