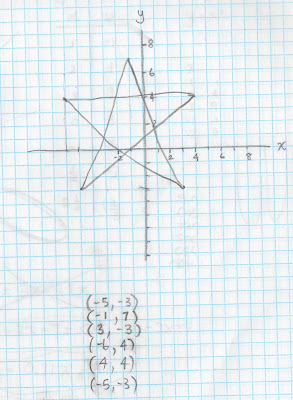 The arrival of Sophie’s graphing calculator as I mentioned has led to an interest in functions and graphing. I love scurrying up mathematical rabbit-trails with my kids. Yeah, I’m a math geek. I guess it comes of discovering a surprising aptitude for higher math after years of being considered an artsy kid.

Next I had Sophie work with a function machine that doubled the number and added 3. She created a table of results. The input number went in the left-hand column, and the output number on the right.

Next we went on to Cartesian co-ordinates. Sophie was familiar with grids and co-ordinates even if she hadn’t worked specifically with Cartesian graphing. But we had some fun with the secret puzzles like those shown above. I wrote out the co-ordinates and her job was to plot them and drawn lines connecting them to find the secret shape.

Then it just remained to combine the “function machine” and its output tables of x and y values with the graphing we’d had so much fun with. After she’d plotted y = 2x + 3 and y = x² – 1, recognized and filled in the lines produced, we fed her calculator the same functions. She was thrilled to see the exact same lines taking shape in the display.

Today we were talking about why a knowledge of functions and graphing is useful. My example was doing a study to determine how many bath towels households have, as a function of the number of household members. You would collect data and then plot them, find the line of best fit and then describe a function that would explain the relationship between number of family members and number of towels. And allow you to make predictions based on that function. This was just silly enough for her to appreciate.

One thought on “Graphing”