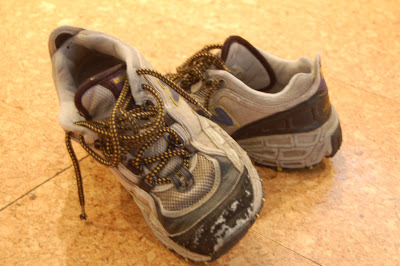 There was a time in my life when I really loved running. It probably started when I was interning in Newfoundland. I’d bike to Logy Bay Road and run out to the cliffs at Middle Cove. The feeling of being out on the edge of the Atlantic Ocean, between rock and sky, really hooked me. My running really kicked into high gear when I moved to Halifax and discovered Point Pleasant Park. And when I moved to BC it continued all over Monte Christo peak right up until I was 22 weeks pregnant with Erin.

And then …. I remember running shortly after she was born, but it just wasn’t the same. Whatever vessel running helped fill inside me was being drained at least as quickly by the juggling required to leave my very attached little baby behind. Mountainous trail-running was what I was doing, definitely not conducive to a baby-jogger. So that was that. I didn’t really miss it. I had a baby. And then another, and another and another.

Eventually I was missing my running. There was a period of time after Sophie was born where I felt a terrible need for something like running. I tried getting out a few times. Various kids wanted to come with me. I tried running slowly with a 6-year-old sidekick who got tired after 300 metres. I tried letting two kids bike along beside me while pushing one in the stroller but our only road was a highway; we were a convoy of fragile wobbly beings sharing the road with logging trucks. It wasn’t good. With Chuck on call so much and various nurslings needing me throughout the night it was not so simple to just “get up early and leave the kids with dad.” I tried a few times with the desperation borne of feeling my precious running moments were being borrowed from the rest of my life. I got shin splints. I gave up. I turned into a couch potato. Or a mouse potato, actually, as we refer to my species here.

My friend Debbie has inspired me. Having never run before in her life she has gradually over the past two months worked herself along the Couch to 5k program. Two or three weeks ago she began to even really like running, and now she’s finding herself enjoying (of all things) running outdoors! As she shared her progress it suddenly dawned on me that most of the barriers to my running had disappeared over the past year or so. My kids can now be safely left home alone in various combinations. They don’t even mind. Even Fiona, who loves going everywhere with everyone, can be persuaded to hang out at home with her siblings without too much effort.

So I’m following Debbie on the C25k path. I figure if I start really slowly I’ll avoid the shin splints I’ve encountered the last few times I tried to start running. I started right at the beginning of the program, with the leisurely walk-run-walk intervals. So far the only injury I’ve encountered was a nasty blister on Day 2, thanks to my old worn-out trail runners — and I barely even noticed it until I got home and noticed all the blood (the kids thought it all quite hideous). I’m cheating a little. I ramped things up to Week 2 a day early. But so far I’m keeping things pretty sane, going slow, giving myself a recovery day in between, running for now on the odd-numbered days.

I love the excuse to get out all by myself into the wide outdoors for something as energizing as a run. I’ve promised to run with Fiona on any of the in-between days if she wants, but odd-numbered days are mine.