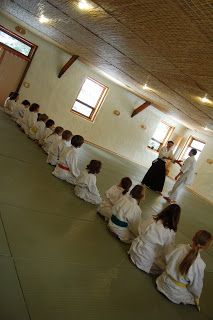 It means “a seminar retreat,” or “training and living together.” At our dojo, for the children, it’s an aikido intensive that, while it doesn’t involve any overnights, does include shared meals, activities, chores and classes over the course of a long day. This is Sophie’s 4th gasshuku, including the summer aikido camp. She tested for and received her yellow belt at the last one. And for the first time Fiona was welcome to try the gasshuku, provided I could be available to take her home at mid-day if she was running out of steam. She was keen to give it a try. 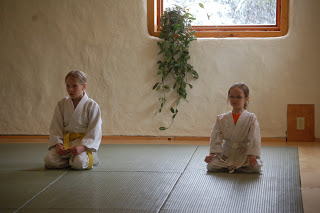 They started by cleaning the dojo floor, and then with a double class. The first hour was devoted to including the younger children (the age-group Fiona is technically in), the ones not doing the gasshuku. There was a lot of stretching and review of simple skills, and a couple of games. After a quick break the next hour was more focused on practicing and refining skills. I was in the kitchen prepping lunch but I could hear them working really hard. By lunch time they were all rubber-legged. 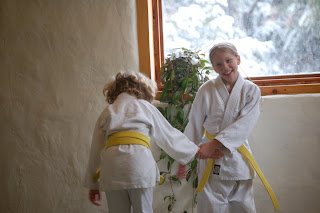 After lunch they had outdoor activities for an hour or so. Then it was back into the dojo for more skills development. By this time one other under-8 had joined the class, so Fiona had someone a little more her size to work with when partnering up. They worked on balance, stance, focus, co-operating, sensing and responding to partners, wooden sword skills and a variety of throws and movements.

Despite a snowstorm the gasshuku was fairly well-attended. There are two sets of aikido classes in the region taught by the same two sensei, but the dojo near us is the real thing and the kids from the other program love to come out here for special events like this. 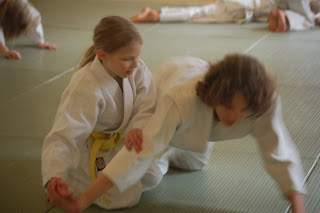 At the end of the classes they played some more games like shark, spider tag and sumo, all favourites with the kids. The kids were all dragging by then with rubber legs and sore knees.

The last event of the day is the belt-testing. No one was actually testing for a belt this time, but all students go through the testing for their upcoming level at every gasshuku. Fiona had decided in an advance that she wouldn’t do this part, but when it came time and all the big kids were doing it she just went ahead an did what was in essence mock testing for her yellow belt.

At the end everyone was presented with a certificate of participation and the group photo followed.

Fiona was asleep by the time we got home in the van. A very self-satisfied sleep, though.