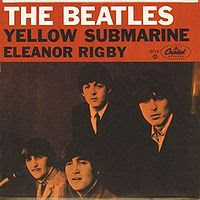 Noah’s quartet has always been interested in moving beyond the boundaries of classical music. They’ve played folk tunes, video-game themes and movie soundtrack themes as well as good old Bach, Haydn and Mozart. Last year they also had fun with arrangements of the Beatles’ “Yesterday” and “Eleanor Rigby.”

I’m in my mid-forties, and the Beatles were retro even when I was a kid. But I owned almost all their albums when I was a teen because the music was so great, and because the Beatles had sort of “come back” into the realm of cool even amongst my metal-head friends. And they’re back again in our little town a generation later — or probably they never went out at all. At last weekend’s bottle drive they provided the soundtrack of choice for the two 13-year-old girls we were sorting skunky beer cans and pop cans with. And this season we’re working on Eleanor Rigby with the community orchestra. Which means that our motley crew of 50-somethings, teens and tweens, and everyone in between and beyond, are suddenly sharing pop music, and loving it. And Eleanor Rigby is one of the pieces Fiona chose to challenge herself with learning to play in the orchestra so even she is getting a piece of the Beatles.

All of which led me to a downtown independent Calgary record store at 8:45 on a Friday night with a little girl in tow to purchase a Beatles compilation CD. “I play Eleanor Rigby on my violin,” she explained to the greasy-long-haired guy in a black Aerosmith T-shirt who rang through our purchase. “No way, cool!” he responded, asking her how old she was. She grinned and told him she was six, and then eagerly took the CD and receipt from him, tucking it under her arm. Probably not his typical Friday night clientèle.