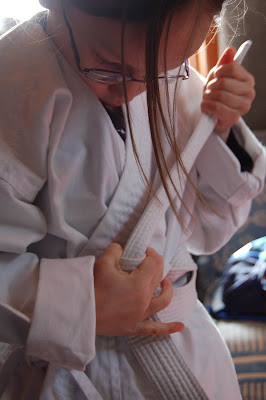 It was one year ago this weekend that Fiona and Sophie officially became Aikido students. From the start I had the sense that we’d discovered a gem of an activity for us. It remained to be seen whether the kids would feel the same way.

Aikido has really grown on them and they seem very committed over the long term. They relish the challenge, the hard physical work, the regular routine, the work on focus and values, the sense of community, the fun.

Sundays are the big Aikido day for us, the double class. We shed our shoes or boots outside the Japanese-style building. The girls head into the change room where they unroll their dogis and change into them from their regular clothes. Students are discouraged from arriving in their dogis; to wear them outside the dojo is to treat the uniforms with too much casualness. The change rooms are cold so there’s always a rush to get the belts tied properly and into the dojo where physical work can start warming them up.

Theoretically there is the class for young children (5 and 6-year-olds) first, then a half-hour of overlap where the 7- through 14-year-olds join, then the youngsters are dismissed and the older kids carry on for 45 minutes or so. But in reality there’s a fluidity to it all. Three older siblings, including Sophie, are part of the Little Kids’ Class as mentors and just to take the opportunity to get warmed up. And other Big Kids often arrive early and join in. When it’s time to dismiss the younger children, three of them, including Fiona, often remain, as they’re older or more experienced and enjoy the challenge that ramps up a bit during the final 45 minutes. 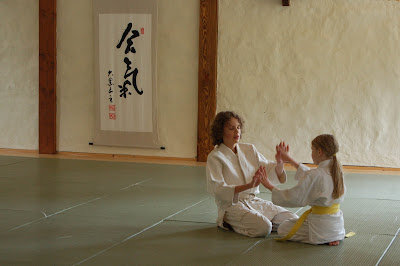 Watching these classes is to me like watching the martial arts equivalent of our small-town Suzuki violin classes. Various ages and levels are included. The pace varies — large muscle crazyness, then quieter more cerebral tasks, then something collaborative, then work with partners or individually. Parents are part of it all too, as much as they like. The classes include a variety of tasks often designed to work on multiple skills, some of which are subtle and not taught explicitly, but part of the task nonetheless. The more I watch the more depth I see in the teaching. Here Sophie and her partner are doing a “mirroring exercise,” learning sensitivity to anothers’ movements, attentive focus, gentle touch, a kinesthetic awareness of movements and position in space, and taking turns being leaders and followers. There’s routine, but also flexibility and creativity.

Aikido is non-competitive, but excellence is always a value, as are things like persistence, respect and appreciation of others’ learning. Learning is organized to some extent into levels, but the emphasis is on the individual’s learning, not on the pace of mastery or the benchmarks themselves. More advanced students are expected to support the learning of less advanced student and also reminded that they learn from those beginners too. There’s a strong sense of belonging to a community of fellow-learners. It’s very Suzuki-like … another educational export from mid-20th-century Japan.

And of course they start and end with a bow.