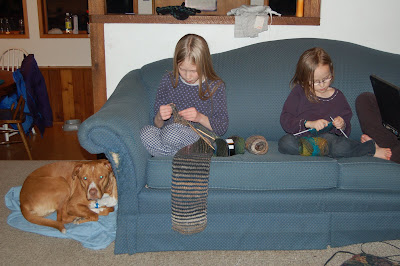 This photo is from before Christmas (and you can see “Erin, the couch-prop,” as Sophie has been known to refer to her, under the laptop to the right) but I had to wait until after Christmas to post it because a couple of surprise gifts are shown. Sophie’s and Fiona’s knitting skills are continuing to improve.

Sophie is now a member of Ravelry and is brilliantly capable. She can knit a gauge swatch, follow a pattern, adapt it, do fair-isle stranding and all sorts of other fancy stuff. She is working here on the scarf we made collaboratively for my sister, using alternating stripes of different balls of Noro Kureyon yarn. She was so enthralled by the serendipitous interweaving of colours that she’s started a similar scarf for herself.

Fiona contributed a little bit of her own knitting to this same scarf and in the process learned how to purl. This gave her a renewed zeal for knitting and she returned to a languishing project, a bean bag that she wanted to make for her grandma. The bean bag was intended as a teaching aid for violin lessons. She became much quicker at knitting and her mistake-rate dropped to minimal levels such that she now finds knitting gratifying. She finished the bean bag in time to give it as a Christmas gift upon her grandma’s arrival back from Ontario.

Sophie, Fiona and I all felt somewhat at a loss once our Christmas knitting projects were completed. But gradually we’re finding new projects to turn our needles to.

4 thoughts on “Knitty girls, and dog”