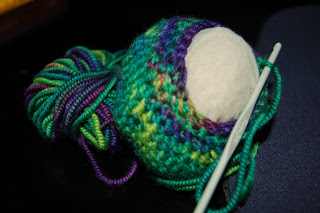 They play a game at aikido to work on their rolls where the kids run one at a time towards the sensei. He tosses a hackey sack towards them as they near him. The idea is that they’ll catch the hackey sack in one hand and do an aikido roll over that shoulder. Then they toss the sack back to the sensei, who tosses it to the next runner. The more capable kids are encouraged to alternate sides. Less advanced kids just do whatever comes most easily, and the important thing is the roll, not whether you catch the hackey sack or not.

Fiona is doing part of the bigger kids’ classes these days, and this week she got frustrated by her inability to catch the hackey sack. She really just needs someone to play toss and catch with her at home. Coincidentally that morning I had woken up and decided to try to teach myself to crochet. I had spent aikido class practicing a single crochet stitch with the only tools I had on hand — a DK-weight wool yarn and a finicky 2.5 mm crochet hook. Kismet or something. Clearly a hackey sack was meant to materialize from my yarn and little hook.

I frogged out my practice work and went home and googled. I’m not nearly good enough at crocheting yet to follow a pattern, but I did manage to figure out increases and decreases and working in the round, which really isn’t rocket science in the crochet realm. And today, with the addition of some rice and a bit of the toe of some old tights, we have a hackey sack.

3 thoughts on “Aikido and crochet”