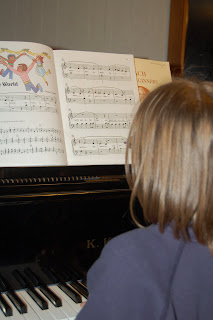 Fiona had her sixth piano lesson today. We’d had a week with very little practicing due to our Calgary trip, but she had a terrific lesson in any event. She’d learned three new pieces, mastered counting aloud while playing and reined in her tendency to rush towards the end of her pieces. She’d also done a fair bit of the theory bookwork in her second primer. She hasn’t quite finished all the theory in the book, but she’s close.

And so she’s been moved into her third primer book, the 2A book from the Celebrate Piano series. I don’t think we’ve quite found her instructional level yet, but we’re getting closer. Thank goodness her ‘substitute teacher’ has been happy to vault her along.

After her lesson was over, just as Erin was sitting down on the bench, the teacher passed her the sheet music for a simple Christmas melody (“Now Sing We All Merrily”) and suggested she should learn it in preparation for a mid-December sing-a-long party at her regular teacher’s house. She plunked herself down at the electronic piano in the waiting area and taught it to herself, and then memorized it, in about 5 minutes.

When we arrived home she said she wanted to learn more Christmas music, so I pulled out an old Bastien Christmas Primer book with some simple hands-together harmony worked in here an there, as well as dotted rhythms, ties and accidentals. She set to work. Now, a couple of hours later, she’s figured out most of the dozen or so pieces — almost entirely on her own. She’s not learning by ear, either, something I know she can do easily like any good Suzuki student if she knows a tune. I can tell she’s not learning by ear, because she wouldn’t recognize some of these tunes, and even with the ones she might be familiar with she asks me to play through after she’s sight-read her way through successfully, because she’s been so focused on the reading that she hasn’t recognized them.

So her reading on piano is really starting to click. That will make her regular teacher happy.

We normally have a rule that there’s no Christmas music in our home until December 1st … except for any necessary practicing of ensemble pieces undergoing rehearsal. But we’ll make an exception for Fiona in this instance, I think.