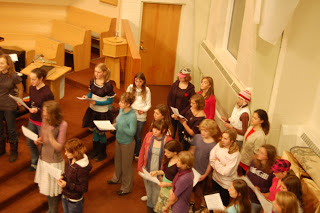 This is part of the soprano section of Corazón, the youth choir that Erin sings in. They have guys — broken teen male voices — a real rarity in North American choirs. Over the past three years this choir has become a powerful draw in Nelson. It has energy, and a reputation, and teens want to be part of it. Even young men. There is very little tradition of choral singing here, so a dynamic choir director starting a youth choir is pretty much starting from scratch. When Allison started Corazón about five years ago, it was just a small handful of teenaged girls who had grown a little too old for the children’s choir. I heard them back then just learning to sing in parts and thought “that’s nice.”

I hear them now and I think “wow!” This year they are sixty strong, and building each year on the pinnacle of the year before. They are singing complex four- and five-part traditional choral and world music arrangements. Here’s a rather poor-quality YouTube sampler from their concert a year ago — and believe me, they’re bigger and better and stronger now.

Erin, who had had to give up the children’s choir program in Nelson after a couple of year due to scheduling issues, heard them last spring and decided on the spot that she wanted to join. I knew it was going to be a scheduling nightmare, but I realized that I have a kid who is absolutely passionate about music who has no peer-group of similarly-afflicted teens. The couple of local teens who are also violinists are nowhere near her level. The one who is within two or three years of her level lives almost an hour away. Her experience this summer, travelling and performing with musical teens, made it clear that getting her into contact with other teens who “do music,” a given for most music students anywhere else, should be a priority.

We managed to work it out by doing some pretty brutal re-arranging of piano lessons, violin lessons, my teaching schedule, orchestra and group class. It was rather a domino effect in our weekly schedule and the schedules of our local music students, but sometimes there’s something pretty special going on that you know is so perfect for your family that you just have to make it work. As it turns out Erin and D. and her friend S. are all doing Corazón, so all three come out of school at noon on Tuesdays and I drive them down to Nelson for the afternoon. My girls do their piano lessons while D. and S. hang out downtown and have a lovely time, and then we all meet up at the church for rehearsal and head home together, grabbing a ritual decaf or chai on the way and arriving back at 7 pm.

So far it’s been amazing. There’s additional strength in the bass section now and the quality of the choir’s sound is maturing as these kids gain experience. They’re planning a big swanky tour in March. There are concerts next month and more in the spring. Rehearsals are hard-working affairs and they’re down to the nitty-gritty now. Erin has of course learned the music very easily and feels comfortable. The girls are all having fun. We’re all enjoying the carpooling.

I have no choir background. Except for the summer family choir which I do for 5 days each August with my younger kids, I haven’t sung in a choir since elementary school. The local community choir has always been something I dreamed of singing in one day, but its rehearsals conflict with my work, and now my kid have claimed it as theirs.

Which brings me to the local community choir. They’re a bit of a diamond in the rough. I’m not sure why our town should have such a great choir, but people drive from neighbouring towns to be part of it. Erin, Noah and D. are the three under-40’s now singing in that choir — giving Erin and D. a double repertoire of music that they’re madly learning. This is Erin’s third year and the other kids’ first. Noah got swept up in choir euphoria this summer and I made a quiet diplomatic request of our local choir director. It’s an adult choir. She had made an exception for Erin the year she was 13, and had occasionally welcomed older high school kids in the past. But asking her to take in Noah, at age 11 — well, I knew she had once tried to develop a kids’ choir and had decided she never wanted to do that again. So I asked quietly and carefully, fully expecting her to say no. But he had proven himself in the summer school choir with a bunch of adults, and our local director agreed.

So he’s loving it and is doing well. He comes home from Monday evening rehearsals bubbly and energized. I wondered if it was mostly that he enjoyed being there with Erin and D., if he liked the banter and humour of the rehearsals. But then a couple of weekends ago due to illness and conflicting schedules, he ended up arriving at a first-soprano sectional rehearsal where he and a 40-something woman were the only singers there. The director was there as a coach, and she is someone he knows, sort of, as a peripheral family friend and I think he likes her — she’s a fun retired lady with a sense of humour and a knack for putting people at ease and a nice manner with my kids. So I just left Noah in the little back room of her house, assuming another soprano or two would likely show up late. I worried a little about how he’d feel being there without Erin, without D., with perhaps only three or four people to sing with. But I figured worrying wouldn’t do any good, so I shrugged and headed home.

When I picked him up an hour later I asked how rehearsal had gone. It turned out there were just two sopranos, him and the other lady, plus the director. “It was good,” he said. “Erin wasn’t there, so I felt comfortable asking a few questions I wouldn’t have otherwise. We got some good work done.”

Well. Who would have guessed. My shy homebody of a little guy, comfortable as anything singing away, almost solo, in a room with two women of his mother’s generation and beyond, and coming home pleased with the work they’d accomplished and not giving a thought to the demographics of the social mix.

This is what I love about choirs, that they’re great social bridges, that musical cohesion can be achieved despite vast mismatches in age, musical training and social roles. They’re so accessible. Under the right director an incredible amount of synergy can develop in a very short period of time with no more raw material than motivated people. Choirs have a kind of grass roots energy that is alive, that springs directly from human bodies with nothing else in the way.

I never cry at string performances, but I inevitably cry at any choir performance where young people are singing.

Singing the praises of choirs

3 thoughts on “Singing the praises of choirs”